Chicken of the woods mushroom 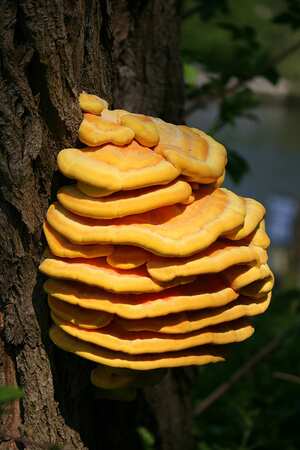 Chicken of the woods mushroom

Individual "shelves" range from 2-10 inches across. These shelves are made up of many tiny tubular filaments (hyphae). The mushroom grows in large brackets - some have been found that weigh over 45 kg (100 pounds). It is most commonly found on wounds of trees, mostly oak, though it is also frequently found on yew, cherry wood, sweet chestnut, and willow. Laetiporus species produce brown rot in the host on which they grow.

The mushroom can be prepared in most ways that one can prepare chicken meat. It can also be used as a substitute for chicken in a vegetarian diet. Additionally, it can be frozen for long periods of time and retain its edibility. In certain parts of Germany and North America, it is considered a delicacy.

However, a small percentage of people can have an allergic reaction when ingesting it. To quote Michael Beug " causes mild reactions in some, for example, swollen lips" or in rare cases " nausea, vomiting, dizziness and disorientation." This is believed to be due to a number of factors that range from very bad allergies to the mushroom's protein, to toxins absorbed by the mushroom from the wood it grows on (for example, Eucalyptus or Cedar), to simply eating specimens that have decayed past their prime. As such, many field guides request that those who eat Laetiporus exercise caution by only eating fresh, young brackets and begin with small quantities to see how well it sits in their stomach.