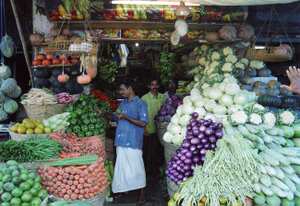 5 A Day is the name of a number of programs in countries such as the USA, the United Kingdom and Germany, to encourage the consumption of at least five portions of fruit and vegetables each day, following a recommendation by the World Health Organisation that individuals consume at least 400g of vegetables daily.

Eating seven or more portions of fruit and vegetables a day is healthier than the minimum five currently recommended and would prolong lives In April 2014, Dr Oyinola Oyebode from University College London, Department of Epidemiology and Public Health, released a report following a study of 65,226 men and women, indicating the more fruit and vegetables people ate, the less likely they were to die - at any given age.

5 a day schemes, by country

Go for 2 & 5 is the equivalent campaign in Australia, in which adults are said to need to eat at least two serves of fruit and five serves of vegetables each day.

In Canada, the Canadian Produce Marketing Association (CPMA), the Heart and Stroke Foundations Health Check Program, and the Canadian Cancer Society have partnered together to create the Fruits and Veggies- Mix it up! campaign, encouraging Canadian families to eat healthier. The campaign focuses on easy ways to eat healthy wherever and whenever you can.

The CPMA is a non-profit organisation representing over 700 international and Canadian companies which are now responsible for 90% of fresh fruit and vegetable sales in Canada. It is funded through voluntary membership, as well as various services, activities, and sponsorship programs. The Heart and Stroke Foundation uses a team of registered dieticians that provide expertise when developing healthy eating information, tools, and resources. The Health Check symbol is placed only on foods meeting the nutrient criteria based on the recommendations of Canada’s Food Guide, making it easy for shoppers to choose healthier options at the supermarket.

The 5 am Tag (5 a Day) program operates in Germany.

Fem om dagen (five a day) is the Norwegian Directorate for Health recommendation to eat five portions of fruit, berries or vegetables each day.

The 5 a Day program in the United States has become Fruits & Veggies – More Matters.