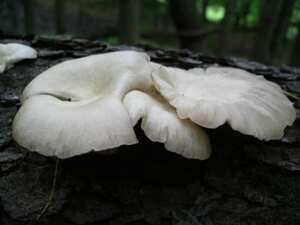 Oyster mushroom growing in the wild

The oyster mushroom, (Pleurotus ostreatus), is a common edible mushroom. It was first cultivated in Germany as a subsistence measure during World War I and is now grown commercially around the world for food. It is related to the similarly cultivated "king oyster mushroom". Oyster mushrooms can also be used industrially for mycoremediation purposes#1. The Oyster mushroom may be considered a medicinal mushroom since it contains statins such as lovastatin which work to reduce cholesterol.

The oyster mushroom is frequently used in Japanese, Korean and Chinese cookery as a delicacy: it is frequently served on its own as a soup, sometimes stuffed, or in stir-fry recipes with soy sauce. Oyster mushrooms are sometimes made into a sauce used in Asian cooking, which is similar to oyster sauce. The mushroom's taste has been described as a mild with a slight �odour� similar to anise. The oyster mushroom is best when picked young; as the mushroom ages, the flesh becomes tough and the flavour becomes acrid and unpleasant.

Oyster mushrooms contain small amounts of arabitol, a sugar alcohol, which may cause gastrointestinal upset in some people.

Both the Latin and common name refer to the shape of the fruiting body. The Latin pleurotus (sideways) refers to the sideways-growth of the stem with respect to the cap while the Latin ostreatus (and the English common name, oyster) refers to the shape of the cap which resembles the bivalve of the same name. Many also believe that the name is fitting due to a flavour resemblance to oysters. #1 Mycoremediation is a form of bioremediation, the process of using fungi to return an environment (usually soil) contaminated by pollutants to a less contaminated state.