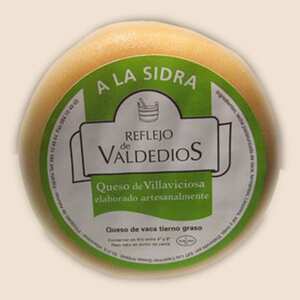 Reflejo de Valdedios a la Sidra is a semi-soft, rind washed, pasteurised cows' milk cheese produced by the Amandi brothers at Los Caserinos dairy in the Asturian village of Grases in the concejo of Villaviciosa.

The cheese is washed in Asturian cider and matured for 1 month. This gives it a pleasant, acidic, but mild flavour and an apple-y texture. The rind is covered with a thin layer of acetate to protect it from mould.

TThere is also a smoked version of the cheese and both are considered kosher.