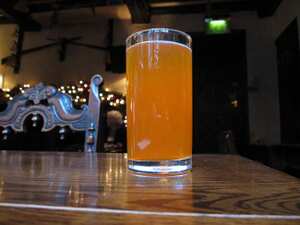 Cider is an alcoholic beverage usually made from the fermented juice of apples, although pears are also used. While any variety of apple may be used, certain cultivars are preferred in some regions, and these may be known as cider apples.

In the United Kingdom, pear cider which has no apple content is known as perry. In the United States and parts of Canada, where the term cider refers almost exclusively to nonalcoholic apple cider, the term hard cider is used for alcoholic cider.

Cider varies in alcohol content from less than 3% ABV in French cidre doux to 8.5% ABV or more in traditional English ciders.

A distilled spirit, apple brandy, is made from cider. Its best known forms are calvados and applejack. In Calvados, Normandy, France calvados is made from cider by double distillation. In the first pass, the result is a liquid containing 28% - 30% alcohol. In a second pass, the amount of alcohol is augmented to about 40%. Applejack is a strong alcoholic beverage made in North America by concentrating cider, either by the traditional method of freeze distillation, or by true evaporative distillation. In traditional freeze distillation, a barrel of cider is left outside during the winter. When the temperature is low enough, the water in the cider starts to freeze. If the ice is removed, the (now more concentrated) alcoholic solution is left behind in the barrel. If the process is repeated often enough, and the temperature is low enough, the alcohol concentration is raised to 30 - 40% alcohol by volume. In freeze distillation, methanol and fusel oil, which are natural fermentation by products, may reach harmful concentrations. These toxins can be separated when regular heat distillation is performed. Home production of applejack is illegal in most countries.