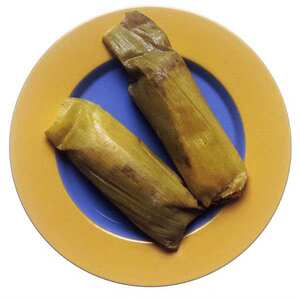 A tamale is a traditional indigenous American food consisting of steam-cooked corn dough (masa) with or without a filling. Tamales can be filled with meats, cheese (post-colonial), and sliced chillies or any preparation according to taste. The tamale is generally wrapped in a corn husk or plantain leaves before cooking, depending on the region from which they come. Tamales are a favourite dish in Mexico that take several hours to prepare and make. Street vendors can be seen serving them from huge, steaming, covered pots (tamaleras). In some places like Mexico City, the tamale is often placed inside a wheat bread roll to form a torta de tamal, which is substantial enough to keep the breakfaster going until Mexico's traditionally late lunch hour.

The most common filling is pork but chicken is also used, in either red or green salsa or mole. Another very traditional variation is to add sugar to the corn mix and fill it with raisins or other dried fruit and make a sweet tamal (tamal de dulce). Since the cooking of tamales is traditionally done in batches of tens if not hundreds, and the ratio of filling to dough (and the coarseness of the filling) is a matter of discretion, there are commonly a few "deaf", or filling-less, tamal (tamal sordo), which might be served with refried beans and coffee. Instead of corn husks, banana leaves are used in tropical parts of the country such as the states bordering the Gulf of Mexico, Oaxaca, Chiapas, Veracruz, and the Yucatán Peninsula. These tamales are rather square in shape, often very large— 15 inches (40 cm) or more— and thick; a local name for these in Southern Tamaulipas is zacahuil. To the south, banana-leaf tamales are also common in the neighboring Central American countries. Another less-common variation is to use chard leaves, which can be eaten along with the filling.

To make a full meal, the tamal is often accompanied by atole, hot chocolate, or champurrado. In El Salvador, Costa Rica, Honduras, Nicaragua and Colombia they are wrapped in plantain leaves, and there are several varieties, including tamal de gallina, tamal pisque, and tamal de elote (in Costa Rica, the name can also be used for a type of corn pastry). They are generally large, similar in size to the tamales of southeastern Mexico.

In Guatemala and Honduras, in addition to the El Salvador versions, there are tamales without filling which are served as the bread or starch portion of a meal:

Tamal de elote (made with yellow corn, sometimes with a sweet taste) Tamalito de chipilín (made with Chipilín, a green leaf) Tamal blanco (simple, made with white corn)

During Christmas holidays, tamales of corn flour are a special treat for Guatemalans. The preparation time of this type of tamal is long, due to the amount of time required to cook down and thicken the flour base.

In Panamá, tamales are considered one of the main national dishes. The Panamanian tamal is fairly large. The most common fillings are chicken, raisins, onions, tomato sauce, and sometimes sweet peas. Rarely you see pork versions. Another variation is tamal de olla, which is cooked in a pot and then served directly onto plates. Tamales are usually served for all special occasions, including weddings and birthday parties, and are always found on the Christmas dinner table.

Peruvian tamales tend to be spicy, larger, and are wrapped in banana leaves. Common fillings are chicken or pork, usually accompanied by boiled eggs, olives, peanuts or a piece of chilli pepper mainly in Lima, the capital city. In other cities tamales are smaller and wrapped in corn husks. They differ from the tamales made in Lima in that they use white corn instead of yellow corn as people in Lima do. Another version is called humita. It can be salted or sweet. Sweet ones have raisins, vanilla, oil, sugar. Salty ones can be filled with cheese (queso fresco) or chicken. Humitas are cooked in the oven or in the pachamanca.

Tamales are also found in Colombia, where there are several varieties (including most widely known tolimense as well as boyacense and santandereano). Like other South American varieties, the most common are very large compared to Mexican tamales - about the size of a softball - and the dough softer and wetter, with a bright yellow colour. A tamal tolimense is served for breakfast with hot chocolate, and may contain large pieces of cooked carrot or other vegetables, whole corn kernels, rice, chicken on the bone and/or chunks of pork. A related food is the envuelto or bollo, which is cooked in a corn husk, and actually resembles a typical Mexican tamal more closely. Tamales in Santander are often called hayacas, as they are in neighboring Venezuela.

Ecuador has a variety of tamales and humitas, they can be filled with fresh cheese, pork, chicken or raisins. Ecuadorian tamales are usually wrapped in corn husk or achira (aka Canna) leaves.

The tamal is also a staple in Belize, where it is also known (in English) by the Spanish name bollo.

Tamales are also found in the Dominican Republic. Instead of tamales they are known as pastillitos, not to be confused with the Latino word Pastel, which is Spanish for cake.