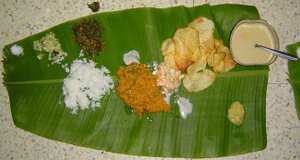 Lunch served on a plantain leaf

Traditionally plantain leaves and banana leaves are used like plates in several dishes, such as Venezuelan Hallacas, while serving south Indian Thali or during sadya. A traditional south Indian meal is served on a plantain leaf with the position of the different food items on the leaf having a significant importance. They also have a religious significance in many Hindu rituals. They add a subtle but essential aroma to the dish. In Kerala, a food preparation called "Ada" is made in plantain leaves. Plantain leaves are also used in making "Karimeen Pollichathu" in Kerala.

The leaves are fairly widely available in grocery stores or open air markets in Venezuela and can exceed two meters in length. They are also used to stimulate appetite as a fragrant smell is given off when hot food is placed on top of the leaf. In Nicaragua they wrap their Nacatamales and also used for their Vigoron, Vaho and other dishes. In Peru they are often use to wrap the famous Tamale (Tamales). In Honduras, Costa Rica, Panama, and Colombia, these are usually used to wrap tamales before and while cooking, and they can be used to wrap any kind of seasoned meat while cooking to keep the flavour in. In the Dominican Republic, the plantain is the country's main food source and is used just as much as, if not more than, rice. Mangu and Sancocho are two signature dishes that revolve around the plantain. The leaves are also dried and used to wrap corn dough before it is boiled to make Fanti kenkey, a fine Ghanaian dish eaten with ground pepper, onions, tomatoes and fish.