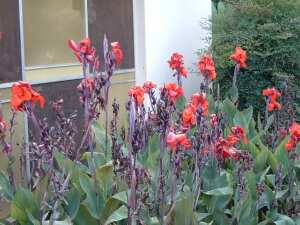 Canna (or Canna lily, although not a true lily) is a genus of approximately twenty species of flowering plants. The closest living relations to cannas are the other plant families of the order Zingiberales, that is the gingers, bananas, marantas, heliconias, strelitzias, etc.

The species have large, attractive foliage and horticulturists have turned it into a large-flowered, brash, bright and sometimes gaudy, garden plant. In addition, it is one of the world's richest starch sources, and is an agricultural plant.

Although a plant of the tropics, most cultivars have been developed in temperate climates and are easy to grow in most countries of the world as long as they can enjoy about 6 hours average sunlight during the summer.

The name Canna originates from the Celtic word for a cane or reed.