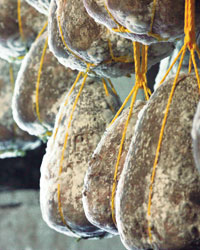 Provolone del Monaco DOP denotes a cheese with the following characteristics: semi-hard, kneaded-curd, matured cheese, produced using only raw milk from cows reared in the area indicated below. When the product is marketed, it should have:

In addition, thanks to its maturing environment, this cheese acquires the strong flavour as the result of a long maturing period. After 7 to 8 months, the provolone will tend to turn even more yellow, its crust becomes thicker and its flavour spicier. It will become more compact, although still relatively soft and without flaking.

Only milk from cows which have been lactating for no more than 230 days should be used for processing. At least 40 % of the dry weight of the cows' food should consist of dry and/or green fodder. The daily intake of green fodder should not exceed 15 kg in order to avoid abnormal fermentation which would compromise the organoleptic qualities of the cheese. The green fodder is the waste product resulting from pruning of cultivated trees (citrus fruit, olive trees, etc.) and deciduous woods (chestnut etc.) and the cleaning of terraces in the production area mentioned in above. Fodder from seed cereal crops (oats, barley and wheat) and/or hay from natural stable grassland and grass and legume crops are also added. Fodder only supplements food from the area specified above, which gives the milk its special characteristics.

The milk intended for processing should be that secreted by the mammary gland and not subjected to any temperature above 40 °C. Coagulation should be obtained using rennet for approximately 40 to 60 minutes, adding solid kid’s rennet or natural liquid calf’s rennet either separately or combined, with at least 50 % of the rennet being solid kid’s, heated to 34-42 °C. When the curds have reached the desired consistency, they are broken up into very small lumps the size of a grain of maize and left to stand for 20 minutes. The curds are then heated to 48-52 °C and left to stand for a maximum of 30 minutes. They are then taken out of the whey and transferred to cheese-cloths or perforated steel whey-catchers for maturing.

Once the kneading tests have given positive elasticity and resistance results, the curds are cut into strips of varying sizes. The mass is then kneaded and moulded, using water at 85-95 °C, into the portion shapes laid down in the product specification. This is followed by hardening through immersion in cold water and salting through immersion in brine per 8 to 12 hours/kg of product. The resulting cheeses are tied together in pairs and hung up on suitable racks where they are left to mature, first at room temperature to dry for 10 to 20 days and then at 8-15 °C for a minimum of six months. At the end of the maturing process, the cheeses should weigh 2,5 kg or more but not more than 8 kg.

The Provolone del Monaco may be produced throughout the whole year using only the milk collected after each milking session without being refrigerated in the parlour or else on a daily basis refrigerating milk directly in the parlour. At the end of the maturing period, the inspection body checks that the product has acquired the requisite characteristics. Only then is the cheese marked on all its sides and labelled.

The specific character of Provolone del Monaco results from a collection of factors unique to the Monti Lattari — Sorrentine Peninsula area, in particular the organoleptic characteristics of the milk that is produced only by cows reared in the area, the processing techniques which even today reflect the craft industry traditions that have been passed down through the generations, and the particular microclimate which characterises the processing and maturing environments. The milk produced in the Provolone del Monaco area of origin has higher fat and protein contents than the national average, which, together with the calcium and non-fat dry matter (defatted dry matter) confirm the nutritional richness of the product and its capacity for a high yield when processed into cheese.

The combination of these special, unique parameters makes this milk is particularly suited to coagulation and the subsequent kneading, and gives the finished cheese highly-prized characteristics in terms of its consistency, in particular its elasticity and strength. All of these facts implicitly confirm the unique composition of the milk, which has a positive influence on the aroma and flavour of Provolone del Monaco.

From time immemorial, the unique character of the cheese has been closely linked to the rearing of the native Agerolese breed of cattle, which provides the milk used to produce Provolone del Monaco. This breed developed over the years in a hostile environment with only makeshift shelters and no pastures, making it rustic and tough and, in spite of the poor grazing, it was able to produce a reasonable quantity of milk with excellent organoleptic characteristics, most of that milk being used in the manufacture of Provolone del Monaco.

The evidence of cows being reared in the Monti Lattari — Sorrentine Peninsula area dates back to 264 BC, when the Picentines, the first inhabitants of these mountains, transformed the wooded area into arable land and began rearing domestic animals, particularly cattle for their milk. From these beginnings, and following considerable cross-breeding with breeds that were introduced in later centuries, the breed that in 1952 was defined as Agerolese was developed. Its coat, torso, limbs and skeleton have particular morphogenetic and somatic characteristics and it produces milk characterised by a high percentage of fat. In the early 20th century, the veterinary Enrico Mollo described the cow reared in this specific area as follows: ‘a dairy cow … 1,35-1,40 m tall, though a few are even taller, its live weight varies from 350 to 400 kg; its coat is dark with a lighter stripe on its back … A good milk-producer gives 17-18 litres of milk per day … in the good season, when there is an abundance of fresh fodder and the weather starts to become mild, the milk becomes more fragrant … the most interesting type of cheese production is the manufacture of provolone cheeses’. Twenty per cent of milk from Agerolese cows is enough to give the DOP Provolone del Monaco its unique flavour. This is due to the fact that the milk produced by Agerolese cows has higher fat and protein rates than other cows' milk. These values, along with the calcium and non-fat dry matter values confirm the nutritional richness of the product and its capacity for a high yield when processed into cheese and give it its unique aroma and flavour.

The geographical area is characterised by numerous valleys deeply carved into the coast and extending inland for many kilometres. They feature marked altitude variations, sharply changing vegetation and a considerable number of cave formations. The extremely high variability of the orographic and hydrographic system of the territory and the intrinsic morphological differences of its various areas give rise to diverse restricted microclimates. Owing to the usually very rugged nature of the area, exposure to sunlight varies greatly, even between contiguous zones. This, along with a mixed altimetry and despite the mitigating influence of the sea, give rise to noticeable variations even in the plant species found in the area. Yearly average temperature ranges between 16 °C and 20 °C along the coast and between 12 °C and 16 °C in the northern side of the mountains, with minimum registered temperatures in the highest areas between 8 °C and 12 °C. Owing to this situation, the isotherms are distributed following the altimetry of the territory. At a local level, the presence of limestone relief affects to a significant extent, the rainfall pattern; rainfall is scattered on average over 100 days, with more intense rain in the highest areas. Although often absent, the prevailing wind is from the southwest.

The traditional name Provolone del Monaco dates back to ancient times and is closely linked to the way in which this cheese was transported for sale at the market in Naples, more specifically when cheese producers in the defined area decided to produce mainly matured products because of the need to move trade to the nearby city of Naples. Due to the inaccessibility of land routes, the best way to reach Naples was by sea: a long, difficult voyage which began in the dead of night. The provolone cheeses were loaded onto rowing boats where the peasants-turned-traders wore greatcoats similar to monk’s cassocks in order to protect themselves from the night-time damp and the seawater. When they arrived in Naples, the people who worked at the market by the harbour began to call their ship ‘Il Monaco’ (The Monk), and its cheese ‘Il Provolone del Monaco’ (The Monk’s provolone). Ever since then, it has been called Provolone del Monaco.