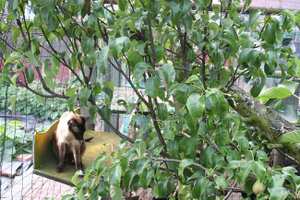 A cat in a pear tree

Pears are consumed fresh, canned, as juice, and dried. The juice can also be used in jellies and jams, usually in combination with other fruits or berries. Fermented pear juice is called perry.

Pears will ripen faster if placed next to bananas in a fruit bowl. They stay fresh for longer if kept in a fridge.

Pears are the least allergenic of all fruits. Using bananas to ripen other fruit Summer and autumn pears are gathered before they are fully ripe, while they are still green, but snap off when lifted. If left to ripen and turn yellow on the tree, the sugars will turn to starch crystals and the pear will have gritty texture inside. In the case of the 'Passe Crassane', long the favored winter pear in France, the crop should be gathered at three different times, the first a fortnight or more before it is ripe, the second a week or ten days after that, and the third when fully ripe. The first gathering will come into eating latest, and thus the season of the fruit may be considerably prolonged.

A neat trick for ripening pears to order

This great trick shown to me by a fruit farmer allows you to ripen pears to order. It's similar to using an old Victorian fruit store - the cold halts the ripening process. Place the unripe pears in the fridge until a few days before you need them. Storing them in a cool dark place prevents them ripening any further so they won't ripen before you want to use them. To ripen them, place them on a sunny window sill for two or three days, turning them daily. 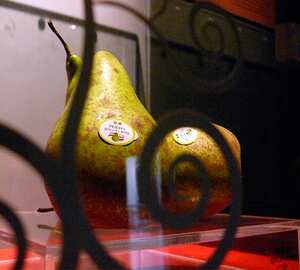 Rincón de Soto pears are of the Blanquilla and Conference variety which have DOP protection. They are produced in Rincón de Soto, Alfaro, Calahorra, and Aldeanueva de Ebro in the province of La Rioja in Spain.

It is the traditional way of their cultivation which makes them produce fruit with some features not found in other areas. These practices are now supported with modern farming techniques. The method is based on a proper design of the plantation. Pruning and thinning of trees is done by hand as is the collection of the fruit. The trees are not watered during flowering and before harvest dates, unless weather conditions dictate, and with prior authorisation.

The pears are inspected for colour, hardness and size and only those that comply with the regulations are allowed to be marketed under the brand of “DOP Rincón de Soto Pears". The rest are used to produce juice or jam, or simply left on the ground. The people who pick the pears carry a gauge to measure them. The Blanquilla pears must exceed a size of 58 mm, and for the Conference, 60 mm in diameter. A proportion of the fruit is sold during immediately after picking and the remainder is sent to cold stores. From there, they are sent to markets and shops throughout the year.

How much does one cup of pears weigh?

Pears are at their best and in season during the following months: September, October, November, December & January.