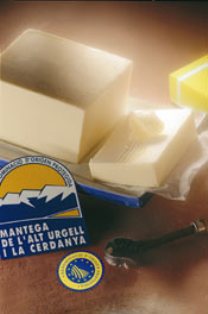 Mantequilla de l'Alt Urgell y la Cerdanya aka Mantega de l'Alt Urgell i la Cerdanya is a Spanish DOP butter made from pasteurised cream from cows' milk. Its features are: solid and uniform in consistency, very easy to spread, liquefies easily with little tendency to adhere to the palate, uniform bright yellow in colour with the intensity depending on the season because it is naturally rich in carotenoids (pro-vitamin A) with a taste and smell which are generally intense at the start, delicate, smooth but slightly acid and reminiscent of hazelnuts because of the fatty acids naturally contained in the fresh cream and the diacetyl formed by the long ripening (48 hours) of the cream with specific lactic ferments.

The area of production of the milk and of manufacture of Mantequilla de l'Alt Urgell y la Cerdanya coincide and cover the municipalities which form the Pyrenean areas of l'Alt Urgell and La Cerdanya, in the north-east of the Iberian peninsula.

The production process involves skimming the milk (0 % fat), followed by sterilisation (120 °C for 20 minutes) and finally chilling at a temperature of 22 °C and pasteurisation and degasification of the cream obtained. The pasteurised cream is then chilled prior to ripening using specific mesophilic lactic ferments which operate for 20 minutes at a temperature of 22 °C to give an acidity of between 80 ° and 100 ° Dornic, which demonstrates adequate growth. The cream is sown using these ferments incubated with milk from the area at a rate of 2 % to 3 % of ferments per 100 litres of cream. The process is carried out at a temperature of 16 °C to 18 °C for a period of 48 hours, at which point the cream has ripened sufficiently and has an acidity of 40 ° to 50 ° points Dornic. The cream is whipped until the size of regular, uniform butter particles desired (that of a grain of rice) is reached. Following separation of the buttermilk, the butter is washed and then compacted to produce a slab. The process finishes with the packaging of the butter.

The addition of colourants, any other additives and the presence of traces of antibiotics or fermentation inhibitors is totally prohibited.

Until the early years of the 20th century, wine-growing was one of the main agricultural activities in this area so the phylloxera catastrophe meant that alternative ways of stimulating the economy for farmers had to be found. It was decided to direct the economy towards livestock production, replacing the vineyards and almond groves by natural and artificial meadows, which were needed for herds to increase.

While at first livestock were raised mainly for meat, later milk became the main product of these holdings. Butter was made on the farm using traditional craft techniques and consumed there.

Then in 1915 the Cadi co-operative was set up for livestock farmers in areas which were difficult to access. It collects the milk they produce to turn it into butter.

The regions of Alt Urgell and La Cerdanya on the southern slopes of the Central Pyrenees in Catalonia contain a large number of high mountain valleys watered by streams and brooks. They have a comparatively cold and dry sub-Mediterranean climate with clear cloud-free skies and substantial sunlight, natural conditions which give the flora of the meadows and grazing land special characteristics which make them highly suitable for cattle feed.

The feed of the cows whose milk and cream are used to make butter from Alt Urgell and La Cerdanya consists mainly of forage, which makes up about 70 % of their daily diet. The forage comes from the production area and is fed to the cows as green fodder, hay and silage. The forage is taken mainly from natural meadows, which are first cut at the end of April when the quality is at its peak since cocksfoot, fescue, bromegrass, ray-grass (called ‘margall’ here) and other meadow grasses are beginning to flower. This first cut is placed in silage to preserve the grass's peak nutritional qualities. The second cut is called ‘redall’ and comprises mainly ‘margall’. It is usually made into hay since the climate in June allows rapid drying and very high quality hay is obtained.

During the summer part of the natural meadow is used as green pasture with the aim of using the most tender part to keep the quality high.

Maize forage predominates in the Alt Urgell area and is kept in silage as fodder grain with about 30 % dry matter. There is also lucerne in the area which is gathered before flowering, when the quality is highest, and made into hay. This crop is well suited to the southern, mainly limestone area. Fodder is made up as follows: one third hay and green fodder from natural meadows, one third silage from natural meadows, one third maize silage.

The remaining 30 % of food comprises cereals (barley, wheat, maize, etc.) produced mainly in the Alt Urgell area and the sunnier parts of La Cerdanya where rye is predominant because it is well suited to mountain areas and frost-resistant.

The quality and specific characteristics of this butter are due mainly to the flora and vegetation which are peculiar to the region and form the basis of animal feed and the care taken in manufacturing; the pasteurised cream undergoes a long process of ripening (two days) using mesophilic lactic cultures which are hetero-fermenting (acidifying and aromatising) comprising strains of Streptoccus lactis, Streptococcus diacetilactis and leunostoc citrovorum. The process of incubation and growth of these ferments begins with preparation of the culture medium where they will develop which will be cows' milk from Alt Urgell and La Cerdanya. This method accentuates the unique and characteristic odour which is the specific feature of this butter.