Jerky is meat that has been cut into strips trimmed of fat, marinated in a spicy, salty or sweet liquid and then dried with low heat (usually under 70°C/160°F) or occasionally salted and sun-dried. The result is a salty, stripped, semi-sweet snack that can be stored without refrigeration. Jerky is an early application of food preservation techniques.

Any single preparation, or recipe for jerky typically uses only one type of meat. Of the many types of meat that may be used, beef is the most common. Meat from other animals—such as wild game, venison, elk, caribou and moose—is also used. Recently, other meats have come to market, such as turkey, ostrich, salmon, alligator, and tuna. The meat must be dried quickly, to limit bacterial growth during the critical period where the meat is not yet dry. To do this, the meat is thinly sliced, or pressed thinly, in the case of ground meat. Drying is performed at low temperatures, to avoid cooking or over drying the meat and making it brittle.

Since 1996, jerky has been selected by astronauts several times for space flight due to its light weight and high level of nutrition.

3.8/5 An acquired taste, and one that I've not yet acquired! The Judge 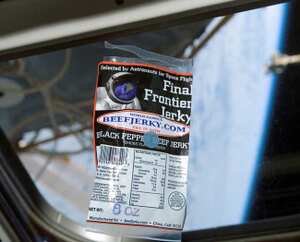 Jerky on International Space Station with Earth visible through the window. Carried to ISS aboard STS-118, Endevour Space Shuttle flight

Jerky can be made from almost any lean meat, with beef or venison being the best. If made from pork the meat must be treated to kill the trichinella parasite before it is sliced and marinated. This parasite could cause trichinosis. To treat the pork, freeze a portion that is 15cm or less thick at -15°C or lower for 20 days. Poultry is not recommended for jerky, because of its texture when raw.

The meat is marinated for both flavour and tenderness. Ingredients for marinades include oil, salt and an acid product such as vinegar, lemon juice, teriyaki, soy sauce or wine. The first step in preparing the meat is to slice it into long, thin strips. Trim and discard all the fat from the meat, because it becomes rancid rapidly Partially freezing the meat before cutting makes it easier to slice evenly Slice with the grain into thin strips approximately 6mm thick if a chewy jerky is desired. Slice across the grain for a more tender, brittle jerky A tenderiser can also be used on the meat.

Properly dried jerky will keep at room temperature 1 to 2 months in a sealed container. However, to increase the shelf life and maintain the flavour, refrigerate or freeze.