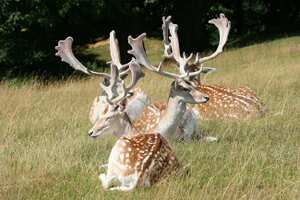 Venison is the culinary name for meat from the family Cervidae. Deer meat, whether hunted or farmed, is termed venison.

Venison may be eaten as steaks, roasts, sausages, jerky and minced meat. It has a flavour similar to beef, but is much leaner and the fibres of the meat are short and tender. Organ meats are sometimes eaten, but would not be called venison; rather, they are called humble, as in the phrase "humble pie." Venison is lower in calories, cholesterol and fat than most cuts of beef, pork, or lamb.

Venison has enjoyed a rise in popularity in recent years, owing to the meat's lower fat content. Also, venison can often be obtained at lesser cost than beef by hunting (in some areas a doe license can cost as little as a few dollars), many families use it as a one to one substitute for beef especially in the US mid-south, Midwest, Mississippi Valley and Appalachia. In many areas this increased demand has led to a rise in the number of deer farms. What was once considered a meat for unsophisticated rural dwellers has become as exotic as ostrich meat to urbanites. Venison jerky can be purchased in such grocery stores, ordered online, and is served on some airlines. Venison burgers are typically so lean as to require the addition of fat in the form of bacon, olive oil or cheese, or blending with beef, to achieve parity with hamburger cooking time, texture, and taste.

How much does one cup of venison weigh?

Venison is at its best and in season during the following months: September, October, November, December, January & February.