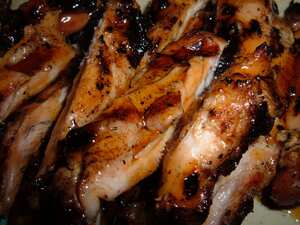 The word teriyaki derives from the noun teri, which refers to a shine or luster given by the sugar content in the sauce, and yaki, which refers to the cooking method of grilling or broiling. Traditionally the meat is dipped in or brushed with sauce several times before and during cooking.

The tare (sauce) is traditionally made by mixing and heating soy sauce, sake or mirin, and sugar or honey. The sauce is boiled and reduced to the desired thickness, then used to marinate meat which is then grilled or broiled. Sometimes ginger is added, and the final dish may be garnished with spring onions.