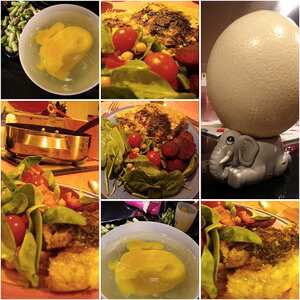 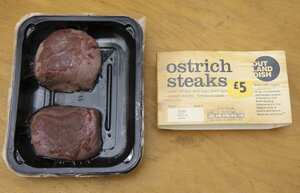 The ostrich (Struthio camelus) is a large flightless bird native to Africa (and formerly the Middle East). It is the only living species of its family. It is distinctive in its appearance, with a long neck and legs and the ability to run at speeds of about 74 km/h (46 mph), the top land speed of any bird. The ostrich is the largest living species of bird and lays the largest egg of any bird species.

The diet of the ostrich mainly consists of plant matter, though it also eats insects. It lives in nomadic groups which contain between five and 50 birds. When threatened, the ostrich will either hide itself by lying flat against the ground, or will run away. If cornered, it can cause injury and death with a kick from its powerful legs.

The ostrich is farmed around the world for its feathers, leather and its meat.

Ostrich meat tastes similar to lean beef and is low in fat and cholesterol, as well as high in calcium, protein and iron. Uncooked, it is a dark red or cherry red colour, a little darker than beef. Earlier in 2008, the UK supermarket, Waitrose were selling ostrich eggs; however, they don't appear on any of their websites at the moment. An Ostrich has NO breast meat like the chicken and turkey. Even though Ostrich meat tastes like beef, the Ostrich does not have fat marbling in the meat like beef. Ostriches have fat, but it collects outside the muscles and is easily removed during processing. Therefore, the cuts of meat are very lean with very low fat content. Ideal for weight watchers who love red meat!

Ostrich Steaks are excellent with your favourite marinade and with sweet sauces like cranberry jelly, redcurrant jelly or even Cumberland sauce.

Fry for approx. 3 to 4 minutes per side – check during cooking with a knife by cutting open slightly.

Ostrich Steak grilling cooking times Grill under a gentle heat & cook for approx. 6 minutes each side and check with a knife by cutting open slightly.

Vacuum seal and cook in a sous-vide water bath for 1 hour at 60°C [140°F], pan sear on a very hot oiled griddle pan for a minute per side, rest for 5 minutes, then serve.

Pan-fry in a little olive oil or grill under a low heat. Ensure the burger is cooked all the way through but try not to over cook, particularly if using a grill as they will ‘dry out’. The meat needs to be lightly browned.

Pan-fry for approx. 6 - 8 minutes each side and check during cooking by slightly opening the burger with a knife or cook until the burger can be broken on one side with tongs.

The ostrich egg pictured was bought by Colin Griffiths from Harewood House, October 2010. To get the egg out he had to drill a hole with a Black & Decker drill and blow the contents out. One egg provided two people with more than four meals: scrambled eggs, frittata and baked cakes. He also had a useful tip: whisk up any surplus egg and freeze in ice-cube trays for later use, baking etc.