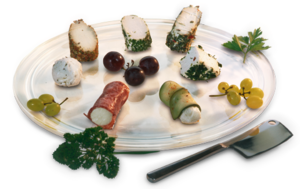 Cream cheese is a generic term for a soft, mild-tasting cheese with a high fat content. Traditionally, it is made from unskimmed milk enriched with additional cream although versions using low-fat or semi-skimmed milk are available.

Cream cheese is not matured and is usually made from pasteurised cows' milk although soft, non-matured cheese made from goats' milk, ewes' milk or even milk from a mixture of animals could be classed as cream cheese in this context.

By the second decade of the 19th century, Philadelphia and the surrounding area had gained a reputation for making cream cheese. At this time the cheese was produced on family farms and only in small quantities.

Around 1873, William A. Lawrence, a Chester dairyman, was the first to mass-produce cream cheese. By adding cream to the process Lawrence was able to create a richer cheese, that he called “cream cheese”. In 1877 he created the first brand for cream cheese `Neufchatel & Cream Cheese`. In 1879, in order to create a larger factory, Lawrence partnered with a Chester merchant, Samuel S Durland. In 1880, Alvah L Reynolds, a New York cheese distributor, began to sell the cheese of Lawrence & Durland and created a brand name for it: `Philadelphia Cream Cheese`. Reynolds chose the name based on the reputation Philadelphia had for producing cream cheese.

Philadelphia cream cheese is now part of the Kraft foods empire, which in turn is one of the many brands under the Mondelez International corporation [April 2013]