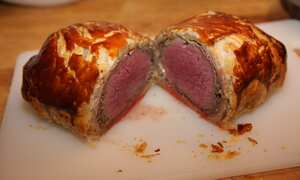 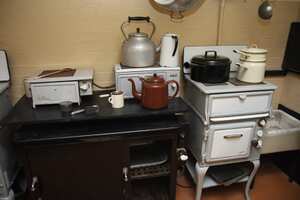 The kitchen in Churchill's underground bunker where his favourite dish would have been cooked many times. 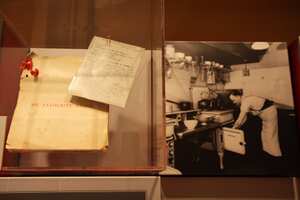 Beef Wellington is a great Christmas alternative to turkey. It was Winston Churchill's favourite dish (he knew what he liked!) Use a good beef fillet (preferably Aberdeen Angus), tell your butcher what you are going to use it for and get them to remove the chain muscle and the silverskin sinews and gristle from the outside of the fillet.

Duxelles Don't rush this, it's quite long-winded and will probably take around 30 minutes cooking.

Serve with potato wedges and a green salad.

I never have white wine so use a little less dry sherry, watered down instead - no one has noticed yet!

I've now made quite a few variations of this recipe, using bacon instead of ham, including paté in the duxelles and using different cuts of meat. My conclusions: This doesn't work well you don't use fillet of beef. It's rich enough without adding paté. If you use bacon, it makes it too heavy and hard-going.

If you are making this for just 2 people, make the duxelles for 4, split the fillet in to two halves, wrap and bake one (to server two people), leave the other wrapped in clingfilm and bake that in a few days time for another lovely rich meal. That way you get two nice fresh crispy wellingtons rather than soggy leftovers. You could also make a chicken wellington with the other half of the duxelles.