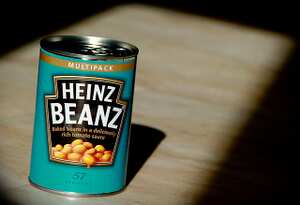 The most famous brand of baked bean(z)

Baked beans is a dish containing beans, sometimes baked but, despite the name, usually stewed, in a sauce. Most commercial canned baked beans are made from haricot beans, also known as navy beans – a variety of Phaseolus vulgaris in a sauce. In Ireland and the United Kingdom, a tomato and sugar sauce is most commonly used. They are commonly eaten on toast or as part of a full English breakfast. In the United States there are multiple styles. Boston baked beans use a sauce prepared with molasses and salt pork, the popularity of which has led to the city being nicknamed "Beantown".

Canned baked beans are used as a convenience food, shortening cooking times for a meal, or may be eaten straight from the can, in camping or emergency settings, as they are fully cooked. 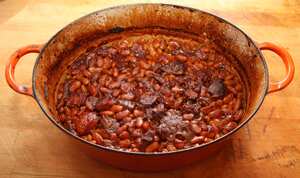 Heinz Beanz were launched in 1901 as "Heinz Baked Beans" and were produced in the United States until 1928. In 1901 Heinz Baked Beans were first sold at the Fortnum & Mason department store in London. After opening its first overseas office in London in 1896, the company opened its first UK factory in Peckham, south London, in 1905. This was followed by a second factory at Harlesden, north-west London in 1919. Production was started at a former munitions factory at Standish near Wigan in 1946. A new factory opened in Kitt Green Wigan in 1958. In 2013 factory in Kitt Green listed as one among the world's top five manufacturing units. It is Europe's largest food factory and turns out more than 1 billion cans every year.

Since 2008, Heinz baked beans have been marketed as Heinz Beanz.

Baked beans are not baked

Heinz Baked Beans are produced by sealing raw beans and sauce in the can, which are then placed in large pressure cookers. This gives the sauce its thick consistency and ensures a long shelf life for the product.

How many beans in a can?

How do you cook baked beans?

Place beans in a microwaveable container and cover. Heat on full power for 1 minute and 30 seconds. Stir, then heat for a another minute. Check that the beans are not too hot before serving.

Empty the beans into a saucepan and stir gently while heating. Do not boil or overcook as this will impair the flavour.

Baked beans are already cooked so only need to be reheated. They are rather good eaten cold straight from the can!

Empty unused contents into a suitable covered container. Keep refrigerated and use within 2 days.