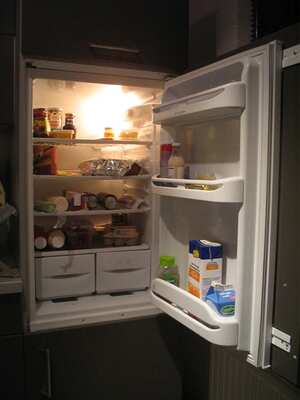 A refrigerator (often called a "fridge" for short) is a cooling appliance comprising a thermally insulated compartment and a heat pump - a mechanism to transfer heat from it to the external environment, cooling the contents to a temperature below ambient. Refrigerators are extensively used to store foods which deteriorate at ambient temperatures; spoilage from bacterial growth and other processes is much slower at low temperatures. A device described as a "refrigerator" maintains a temperature a few degrees above the freezing point of water; a similar device which maintains a temperature below the freezing point of water is called a "freezer". The refrigerator is a relatively modern invention among kitchen appliances. It replaced the icebox, which had been a common household appliance for almost a century and a half beforehand. For this reason, a refrigerator is sometimes referred to as an "icebox". Freezers keep their contents frozen. They are used both in households and for commercial use. Most freezers operate around minus 18 °C (0 °F). Domestic freezers can be included as a compartment in a refrigerator, sharing the same mechanism or with a separate mechanism, or they can be standalone units. Domestic freezers are generally upright units, resembling refrigerators, or chests, resembling upright units laid on their backs. Many modern freezers come with an icemaker.

Things you don't need to store in a fridge

Follow the supermarkets. They will never waste money refrigerating an item if it is not nessecary. If they don't refrigerate a product, then it doesn't need to be stored that way.

The following items don't need to be stored in a refrigerator. In most cases it's just plain unnecessary and others it makes the item unpalatable. You are probably using up valuable fridge space and also wasting valuable energy.

Prolonging the life of picked vegetables

A great way to keep vegetables fresh is to stand them upright in a little water. This works brilliantly for celery, broccoli, cabbages and it also looks attractive.