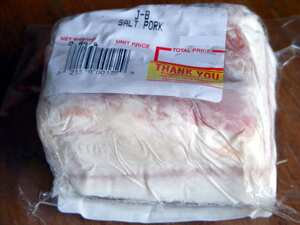 Salt pork or white bacon is salt-cured pork. It is prepared from one of three primal cuts: pork side, pork belly, or fatback. Depending on the cut, respectively, salt pork may be lean, streaky, or entirely fatty. Made from the same cuts as bacon, salt pork resembles uncut slab bacon but is considerably saltier and not bacon-cured nor smoked. Long used as a shipboard ration, salt pork now finds some use in traditional American cuisine, particularly Boston baked beans, and to add flavour in the boiling of vegetables. It generally is cut and cooked (blanched or rendered) before use.