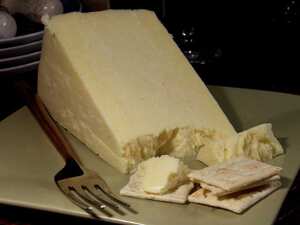 Real Farmhouse Caerphilly production died out during World War II as all milk had to go to the Cheddar factories to help the war effort. After the war these factories started making their version of Caerphilly (initially to help their cash flow as Caerphilly matures quicker than Cheddar), which is how it is mostly known today, dry and crumbly. However, there are now two or three farms making original Caerphilly which is dry in the middle and creamy around the edges. One of these is Traditional Organic Caerffili produced by Caws Cenarth. ==See also== Gorwydd Caerffili, Duckett's Caerphilly cheese