Difference between revisions of "Browning" 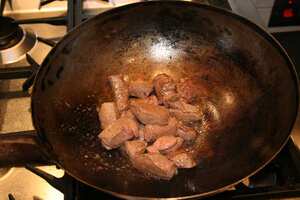 Browning is the process of partially cooking food to give it a brown colour and add flavour. With meats this also helps to remove excess fats. With some foods, such as onions, internal sugars are caramelised on the surface, giving colour and flavour. Ground meat will frequently be browned prior to adding other ingredients and completing the cooking the process. The process is commonly used when adding ground meat to casseroles or other prepackaged meat products.