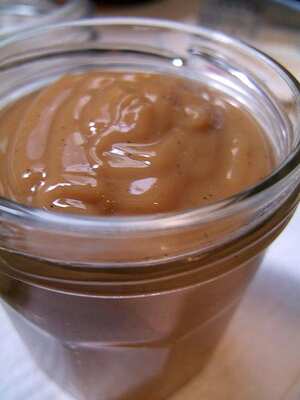 Dulce de leche in Spanish or doce de leite in Portuguese ("milk chocolate"), is a milk-based syrup. Found as both a sauce and a caramel candy, it is prepared by slowly heating sweetened milk to create a product that is similar in taste to caramel. It is also the basis for the elaboration of many sweets and desserts which form part of the classics of the Argentine gastronomy.

It is especially popular in Argentina and Uruguay, and also consumed in Paraguay and Brazil. The French preparation confiture de lait is very similar to the spreadable forms of dulce de leche. There are also other varieties of it around all Latin America.

The Dominican style of Dulce de Leche is more of a fudge than a syrup. A typical preparation involves mixing equal parts whole milk and brown sugar and simmering the mixture over medium heat until it has the consistency of thick yogurt. It is then poured into a mold and left to set for 2-4 hours, depending on the size of the mold. Once it is set, it is removed from the mold and sliced. It is sometimes filled with jelly and jam, marmalade. It can also be flavoured with vanilla or other additives.

The Mexican cajeta is named after the small wooden boxes it was traditionally packed in. Developed as a speciality of the town Celaya in the state of Guanajuato, this Mexican version of dulce de leche is made of half goats' milk and half cows' milk. This is a very popular food for Cinco De Mayo.

There are also other Brazilian, Chilean, El Salvador, Paraguayan, Venezuelan and Colombian varieties of it, which are solid and can be cut into bars. The Venezuelan variety is made in the city of Coro, in the Northwest of the country, and is sold as either pure dulce de leche or made with chocolate swirled in (dulce de leche con chocolate).

There is a similar confection known as Manjar blanco (“white delicacy”) in Peru and Chile, but the preparation of this delicacy does not fully complete the Maillard reaction of the sugars and so has a different flavour and appearance from other versions.