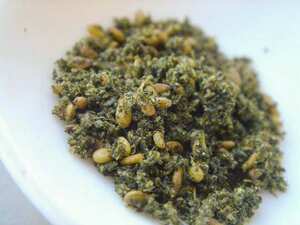 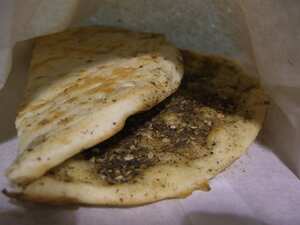 Za'atar (also spelled satar, zahatar or zatr) is a mixture of spices used as a condiment with Middle Eastern origins. The name of the condiment shares the Arabic name of the herb used as the main ingredient.

Za'atar is generally prepared using ground dried thyme, oregano, marjoram, or some combination thereof, mixed with toasted sesame seeds, and salt. Both oregano and marjoram are closely related Mediterranean plants of the Labiatae family which also includes mint and sage, so it is unsurprising that these herbs are commonly used as substitutes for one another. Some varieties may add savory, cumin, coriander or fennel seed. A Lebanese variety of Za'atar usually contains sumac berries, and has a distinct dark red colour.

Za'atar is popular both as an herb and as a condiment in Armenia, Israel, Jordan, Lebanon, Libya, Morocco, the Palestinian territories, Syria and Turkey. It is used throughout the Arab world, but most predominantly in Lebanon, Palestine, and Syria.

Za'atar is used as a seasoning for meats and vegetables. It can be mixed with olive oil to make a spread called za'atar-wu-zayt as a dip for the sesame bread rings known as ka'ak. Za'atar can also be spread on a dough base and baked as a bread, in which case it is called manaeesh bi zaatar. It can be sprinkled on labneh (yogurt that has been drained until it becomes a tangy, creamy cheese). Za'atar is often sprinkled on hummus or served with olive oil as a spread or dip.