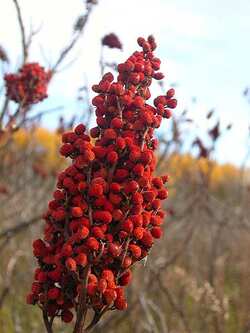 The drupes (fruit) of the genus Rhus are ground into a deep-red or purple powder and used as an acidulant in Middle Eastern cuisine to add a lemony taste to salads or meat; in Turkish cuisine e.g. added to salad-servings of kebabs and lahmacun. In North America, the smooth sumac (Rhus glabra), and the staghorn sumac (Rhus typhina), are sometimes used to make a beverage, termed "sumac-ade" or "Indian lemonade" or "rhus juice". This drink is made by soaking the drupes in cool water, rubbing them to extract the essence, straining the liquid through a cotton cloth and sweetening it.

Sumac is an important ingredient in the Lebanese version of za'atar, a spice mixture and the Syrian fattoush salad.

Where can I buy sumac?

Until the supermarkets catch on to this one, then Greek, Turkish, Lebanese ethnic stores are the best places to buy sumac.

Try The Spice Shop or other suppliers in our spice suppliers section.