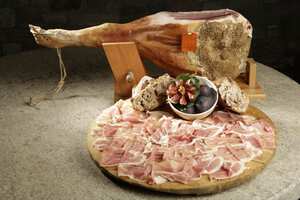 DOP Valle d'Aosta Jambon de Bosses is an Italian salted, naturally cured ham, preserved uncooked. The finished product after aging has a weight of not less than 7 kg. The shape is naturally semi pressed, with a cord passing through a hole made in the upper part of the leg. The colour when cut tends to a wine-red, with a close grain and firm, bright fat which sometimes has a slight pinkish cast at the outside edge. The flavour is distinct, delicate, slightly salty with a touch of sweetness and aromatic undertones, with a trace of a delicate wild flavour. It is made from fresh pig thighs from animals born, raised and slaughtered in and Valle d'Aosta, Piedmont, Lombardy, Veneto and Emilia-Romagna which meet production rule requirements.

The oldest documents attesting to the presence of prosciutti, described as "tybias porci", in the Commune of Saint-Rhemy-en-Bosses are from 1397. Other references to the prosciutto followed over the years, helping to establish Jambon de Bosses's position in the culture and in popular tradition as being unique and having inimitable qualities. At the present time, the production rules follow the lines of the already existing specific national regulations for the designation of origin prosciutti of Parma and San Daniele.

The requirements for denomination of origin products depend on the environmental conditions and on natural and human factors. In particular, the unique character of the raw material is strictly tied to the defined geographic macrozone. In the area which supplies the raw material, the development of livestock-breeding is linked to the extensive cultivation of grains and to the processing of dairy products, which is particularly specialised, making the area very suitable for pig-breeding. The justification for the localised production of Jambon lies in the particular conditions of the microzone. The link with the environment comes from the following factors: the mountain semi continental, cool temperate type climate, with little rainfall; the particular geographic position of the Bosses area, exposed to the sun, which is the precise meeting point of the air currents coming from the hill of Gran San Bernardo, from Col Citrin, Col Serena and Col Malatra. The set of "raw material - product - name" is very closely linked to the specific socioeconomic development of this geographic area, such as to give it certain characteristics irreproducible elsewhere.

It is advisable to conserve whole DOP Valle d'Aosta Jambon de Bosses hams in a cool place and, once opened, the sliced end should be based with oil and wrapped in cling film or tin foil. DOP Valle d'Aosta Jambon de Bosses is best served in very thin slices (preferably sliced by hand) with black bread. It is also excellent when combined with mountain butter, honey and nuts.