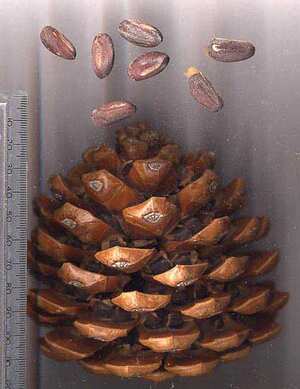 Pine nuts are the edible seeds of pines, found under each scale of the pine cone. Only about 20 species of pine trees produce nut large enough to make harvesting viable.

They are frequently added to meat, fish, and vegetable dishes. In Italian they are called pinoli and are an essential component of Italian pesto sauce. The pignoli cookie, an Italian speciality confection, is made of almond flour formed into a dough similar to that of a macaroon and then topped with pine nuts. Pine nuts are also featured in the Salade Landaise of southwestern France that is densely covered with pine forests. Pine nut coffee, known as piñón (Spanish for pine nut), is a speciality found in the southwest United States, especially New Mexico, and is typically a dark roast coffee having a deep, nutty flavour; roasted and lightly salted pine nuts can often be found sold on the side of the road in cities across New Mexico to be used for this purpose. 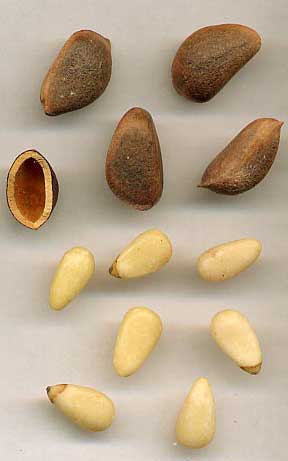 Once the nut has been removed from the pine cone, in common with most nuts, the shell has to be removed before the nut is ready to be consumed. At this point the nut is edible, no other processing is required.

As with many nuts, pine nuts are often toasted to enhance their flavour.

Pre-packed pine nuts can be easily purchased from most large supermarkets.

The pine nut is one of many edible nuts.

How much does one cup of pine nuts weigh?