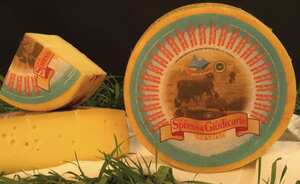 Spressa delle Giudicarie is a cheese made from the raw milk of cows of the Rendena (native), Bruna, Grigio Alpina, Frisona (Friesian) and Pezzata Rossa breeds. The milk must be the product of two or three successive milkings and undergo natural partial skimming.

It is a compact, cylindrical, medium-hard cheese with a straight or slightly convex heel; its crust is either greyish-brown or dark ochre in colour. The paste, markedly elastic in the case of giovane (young) cheeses, is white or pale straw in colour with scattered small or medium-sized holes.

The flavour varies from sweet to sapid with a very faint hint of bitterness after extensive ripening.

The fat content, expressed as a percentage of the dry matter, varies from a minimum of 29 % to a maximum of 39 %; the moisture content too varies, from 32 % to 40 % in the case of ‘giovane’ cheeses and from 28 % to 38 % in the case of ‘stagionati’ (mature) cheeses, the minimum ripening period being three months and six months respectively.

Milk production and the making and ripening of the cheese all take place in the Giudicarie, Chiese, Rendena and Ledro valleys, in municipalities situated in the province of Trento.

There are very early references to the cheese, dating as far back as the ‘Regola di Spinale e Manez’ of 1249. More recently, Marini's ‘Urbario’ for 1915 and 1916 describes ‘Spressa da polenta’ as a typical cheese.

Other references can be found in invoices and production and sales ledgers for Spressa for 1926-34 of the Caseificio di Coltura, a cheese factory in Ragoli, one of the municipalities in the area referred to above.

The proof of the origin is further underpinned by the detailed rules to which the milk producers and the cheese makers and ripeners agree to conform in order to guarantee that the product can at all times be traced on the basis of entries in registers verified by the inspection body.

The milk used in the production of Spressa delle Giudicarie comes from cows of the Rendena (native), Bruna, Grigio Alpina, Frisona (Friesian) and Pezzata Rossa breeds fed on permanent pasture hay, mainly grasses. In accordance with a well-established tradition, no milk produced on alpine pastures or obtained from cows fed on grass only or any type of silage is used.

After being part-skimmed naturally the raw milk is heated in large pans and bovine rennet added.

After being left in whey for up to 65 minutes, the curds are taken out and put in special moulds.

Then, after further standing for 24 hours, the cheese undergoes salting (dry or in brine) over a period of eight to 12 days. Ripening then takes place in suitable chambers at a temperature of 10 to 20 °C and humidity of 80 % or more but not more than 90 %.

The production area centred on the Valli Giudicarie was originally limited to parts of the Val del Chiese and the Val Rendena but came to comprise the area described at 4.3, without, however, including other areas in the Trentino or the neighbouring province of Brescia.

The area has certain objective particularities due to: its mountainous relief; its Alpine-like climate, with cold, dry winters and fairly cool and wet summers; and, above all, its flora, with its numerous endemic species found in rocky areas but also in mountain pastures.

On account of its major nutritional role and its contribution to the local economy, cheese production has been decisive in maintaining large swaths of the population and arresting the harmful depopulation of the countryside in mountain areas.

According to the most recent figures an estimated 24 000 ‘Spressa delle Giudicarie’ cheeses are produced from a total of 2,7 million litres of milk supplied by 150 farms.