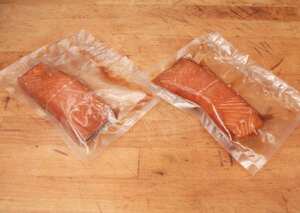 This sous vide recipe ideally uses skinless salmon fillets to ensure the marinade penetrates well, but as the skin is easily removed once the salmon is cooked, they can be used too.

To prevent the teriyaki marinade from being sucked into the pouch while vacuum sealing, vacuum seal but press the cancel button just before the liquid starts to rise up the vacuum pouch, then press seal only.

Light soy sauce should be used instead of teriyaki for a similarly flavoured dish.

Last night's Storm Imogen caused the closure of the Dartford Bridge which resulted in local traffic chaos. Because of this, the salmon was left cooking for 3 hours at 56°C (132.8°F) rather than 1 hour. The result was still delicious however due to the extended cooking time the salmon had a similar texture and mouthfeel to tinned salmon or tinned tuna. So if that appeals to you, cook the salmon for longer!