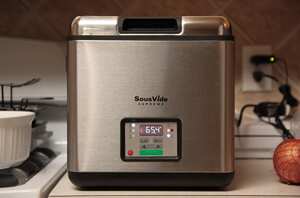 The SousVide Supreme Water Oven is a household cooking appliance that was developed by Drs. Michael and Mary Dan Eades of Eades Appliance Technology, LLC. For nearly three decades, the Eades have operated nutrition clinics across the U.S., written numerous best-selling books on healthy living, and have championed the creation of many nutrition and health products.

It was developed due to the increasing popularity of sous vide cooking, a technique used by some of the worlds leading chefs, which include Thomas Keller, Heston Blumenthal, Joël Robuchon, Ferran Adrià, and Charlie Trotter, amongst many others. Because of the expensive equipment costs (upwards of several thousand pounds), cooking sous vide has largely been inaccessible to home cooks. The SousVide Supreme is an all-in-one solution for cooking sous vide in the home. The SousVide Supreme delivers temperature precision within 1°F or .5°C.