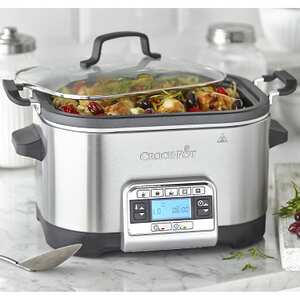 I investigated using one of these multi-cookers in the hope that it could be used primarily as a sous-vide bath in addition to pot roasting, slow cooking, steaming, sauteing and baking. This is what I discovered.

Can you use this Crockpot multi cooker as a sous vide bath?

There is remarkably little detailed information about the possibility of using the Crockpot CSC024 as a sous vide bath in any of the marketing material or user manuals however, some of the product photographs (including the one on the user manual) show the temperature as 300° F next to temperature adjustment buttons. The detailed product information on Amazon even mentions: "Not only does the Crock-Pot Slow and Multi Cooker have these intelligent functions, it also allows you to manually adjust the time, up to 12 hours in the slow cook mode and the temperature from 65 - 230 degree centigrade – allowing you to have total control."

Unfortunately this is not the case. In the slow cooker mode, the only temperature adjustments are: Low, Medium & High.

The temperature adjustment by degrees only applies in the Roasting and Baking functions. Even then the adjustment is in 5 degree increments. I did try an experiment to see if the slow cooker could be used as a sous vide bath in the Roasting mode. However, because there is no preheating mode as with dedicated sous-vide baths the unit failed to reach 65°C (149°F) when half filled with water even after 1 hour.

This slow cooker cannot be used as a sous vide bath.

There is another way! 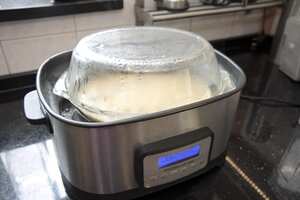 By sitting a casserole dish inside a sous vide cooker you can get a very accurate temperature controlled slow cooker.