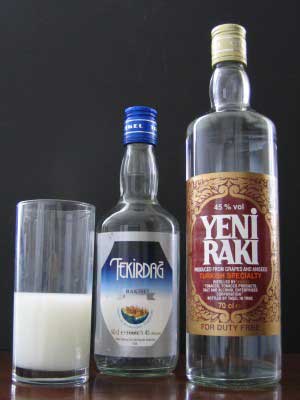 Raki is a non-sweet usually anise-flavoured apéritif that is produced by twice distilling either only suma or suma that has been mixed with alcohol in traditional copper alembics with aniseed. It is similar to several kinds of alcoholic beverages available in the Mediterranean, Middle East, and Colombia, including pastis, ouzo, sambuca, arak, anise castellano, and aguardiente. In the Balkans, however, raki refers to a non-anise-flavoured drink made from distilled pomace, similar to Italian grappa, Greek tsipouro, Cretan tsikoudia, Cypriot zivania and Spanish orujo.

In Turkey, raki is the unofficial 'national drink' and it is traditionally drunk mixed with water; the dilution causes this alcoholic drink to turn a milky white colour, and possibly because of its colour, this mixture is popularly called aslan sütü (or arslan sütü), literally meaning "lion's milk" (a(r)slan is also used to mean strong, brave man, hence milk for the brave).

Tsikoudia or raki is a grape-based spirit from the island of Crete (Greece), made from the distillation of pomace. It is a pomace brandy comparable to an Italian grappa, Spanish and Portuguese Aguardiente, or French marc. Although it carries a strong taste, its alcohol content usually runs at about 34 percent. It is often home-produced by individuals in villages throughout Crete, and so the alcohol content can range from 30-40 percent.

This is commonly offered as an after dinner digestive. Indeed in many taverns it is usually offered, 'on the house', free of charge in combination with fruits and sweets after the meal.

Tsipouro is a distilled alcoholic beverage, more precisely a pomace, from Greece and in particular Thessaly, Epirus, Macedonia, and the island of Crete, where the same spirit with a stronger aroma is known as tsikoudia. Tsipouro is a strong distilled spirit containing approximately 45 percent alcohol by volume and is produced from the pomace. In other areas of Greece, the name raki is used from which the term rakizio is derived, used to refer to the drink's distillation process, often the occasion for a celebration among family and friends.

According to the tradition, the first production of tsipouro was the work of some Greek Orthodox monks. This occurred during the 14th century on Mount Athos in Macedonia, Greece. Gradually, this idea of using the must left over from the winemaking process in order to produce a distilled spirit was passed to viticulturists in poorer regions of the whole country, which already used the distillation process for other purposes. Thus, tsipouro was born.

Depending on the time of year, tsipouro is used either as refreshment or as a hot beverage, and depending on the time of day, it replaces the drinking of coffee or wine. Tsipouro and tsikoudia, as with all alcoholic beverages in Greece, always seem to coincide with various social gatherings, as their consumption had a festive and symposium-like quality.

It is usually served in shot glasses, very cold, often with meze, walnuts, almonds, raisins, feta cheese, olives, or accompanying halva or other desserts in restaurants.

Although not typical, anise-flavoured tsipouro is also available, produced especially in Central Macedonia,Chalkidiki, and Thessaly. Although it has a very different production method, and is usually of a higher quality (and price), this tsipouro is reminiscent of the flavour of the much more famous Greek liquor, ouzo.

Anise-flavoured tsipouro is the closest taste to Turkish Rakı in Balkans, which is different from Greek Raki despite the common name.

Orujo is a liquor obtained from the distillation of the pomace (solid remains left after pressing) of the grape. It is a transparent spirit with an alcohol content over 50% (100º proof). Its name comes from the expression "aguardiente de orujo" (pomace eau-de-vie).

It is a popular beverage in the northwest part of Spain, especially in Galicia where it is also called aguardente or caña and is an element of collective identity. It is also known in Castile-Leon, and Cantabria (principally in the valley of Liébana), where it has become an artisanal craft for some families who after making wine for themselves distillate the pomace in a little pot still. Many high quality distilled spirits have appeared in the last twenty years, including some origin appellations (in Spanish D.O.). These are obtained from quality grapes and produced according to the highest standards and are replacing the traditional home made liquor, nowadays only available in small villages.