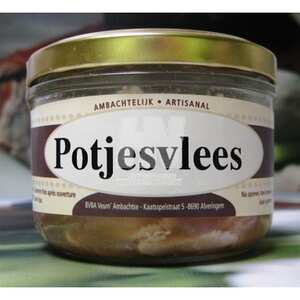 IGP/BGA Potjesvlees uit de Westhoek is a slightly sour Belgian meat preparation in jelly containing three types of white meat, i.e. chicken, veal and rabbit. At least 60 % of the product is made up of meat and 40 % of jelly. The light-coloured jelly is transparent and contains both large and small pieces of cooked white meat, possibly with bone. The colour of the meat can range from very bright white to greyish white. Slices of lemon can be used as a garnish. The jelly may contain pieces of onion, carrot, leek or celery. The dominant taste of ‘Potjesvlees uit de Westhoek’ is that of the cooked white meat and its stock. The jelly has a slightly sour taste.

— gelatin: a maximum of 100 g per litre of cooking liquid

— the following vegetables are added: onion, carrot, leek and celery

The preparation does not contain any colouring substances or preservatives.

All stages in the preparation of ‘Potjesvlees uit de Westhoek’ are carried out within the defined area:

— the preparation of the stock

— the cooking of the meat

— the preparation of the jelly

Specificity of the geographical area ‘Potjesvlees uit de Westhoek’ is inextricably linked to the area. It is based on a local household recipe derived from very old jelly dishes. The knowledge of how to make it, which has been handed down by Westhoek housewives over the centuries, has made ‘Potjesvlees uit de Westhoek’ a typical home-made dish served at fairs. The use of chicken, rabbit and veal suggests a festive preparation which, from the 19th century until after the Second World War, ordinary people could afford only once or twice a year. It was particularly suitable as a dish for summer fairs as it could be prepared in advance in large quantities, while the addition of acidic ingredients imparted a fresh taste and helped to preserve the product.

The adoption of the recipe after the Second World War by local butchers who offered ‘Potjesvlees uit de Westhoek’ in their shops allowed the dish to develop from a food served at fairs to a high-quality charcuterie product supplied throughout the year by butchers and meat producers alike, both as a sandwich filling and as a meal in its own right. The Westhoek, near the Belgian coast, is a prime tourist region with a number of strong culinary traditions, including ‘Potjesvlees uit de Westhoek’.

Causal link between the geographical area

— The tourist brochure ‘West Flanders for Dummies’ mentions ‘Potjesvlees uit de Westhoek’ as a representative product of the Westhoek.

— The provincial site www.streekproductwestvlaanderen.be lists all producers of ‘Potjesvlees uit de Westhoek’ and jars of the product are included in gift hampers.

In addition, its renown and its significance for tourism are borne out by references in national and international tourist guides. For instance, it is included on a map of regional dishes and products in the 1999 Michelin Tourist Guide ‘Belgium/Grand Duchy of Luxembourg’, in the 1995 Ippa guide to Belgian regional dishes and in the guide to regional products published by De Rouck in 2008.

The product has featured in a number of specialist Flemish publications such as ‘Vlaamse gerechten’ (Flemish dishes) from 1975, ‘De kleine Culinaire encyclopedie van Vlaanderen’ (The short culinary encyclopaedia of Flan ders) from 2009 and recently in the 2010 publication ‘De oude Belgen in de keuken’ (Ancient Belgians in the kitchen).

It has appeared in various programmes on national television: Jeroen Meus, a famous Flemish TV chef, presented the product on the popular late-evening show ‘De laatste show’ and it has featured in travel programmes on the Westhoek. References to ‘Potjesvlees uit de Westhoek’ can also be found on line: on news sites, in recipes, on menus, at fairs, etc. Although the Westhoek shares this tradition with the neighbouring region of French Flanders, which is known as Nord-Pas-de-Calais in France, the French ‘pot’je vleesch’ is very different from the recipe used in the Westhoek. In French Flanders pork is always added to the preparation which is browned, sometimes using caramel.