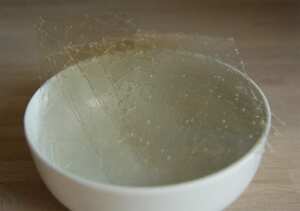 Gelatine (also gelatin, from French gélatine) is a translucent, colourless, brittle, nearly tasteless solid substance, extracted from the collagen inside animals' skin and bones. It has been commonly used as a gelling agent in food, pharmaceutical, photography, and cosmetic manufacturing. Substances containing gelatin or functioning in a similar way are called gelatinous. Gelatin is an irreversibly hydrolyzed form of collagen. Gelatin is classified as a foodstuff and has E441 E number.It is in almost every gummy we eat today as well as other things, such as marshmallows, and skittles.

Household gelatine comes in the form of sheets, granules, or powder. Instant types can be added to the food as they are; others need to be soaked in water beforehand.

Probably best known as a gelling agent in cooking, different types and grades of gelatin are used in a wide range of food and non-food products:

Common examples of foods that contain gelatine are gelatin desserts, trifles, aspic, marshmallows, and confectioneries such as Peeps and gummy bears. Gelatine may be used as a stabilizer, thickener, or texturizer in foods such as ice cream, jams, yogurt, cream cheese, and margarine; it is used, as well, in fat-reduced foods to simulate the mouthfeel of fat and to create volume without adding calories.

Gelatine is used for the clarification of juices, such as apple juice, and of vinegar. Isinglass, from the swim bladders of fish, is still in use as a fining agent for wine and beer. Beside hartshorn jelly, from deer antlers (hence the name "hartshorn"), isinglass was one of the oldest sources of gelatine.

Gelatine is also one of the additives that can be used in molecular gastronomy for foams and gels.

Agar can be used as a vegetarian substitute for gelatine.