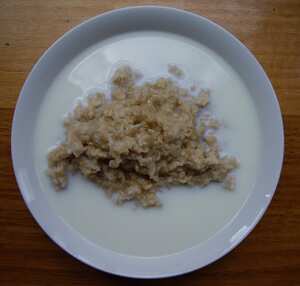 A bowl of porridge with lots of milk

Porridge, or porage, is a simple dish made by boiling oats (normally crushed oats, occasionally oatmeal) or another cereal in water, milk, or both. It is eaten in a flat bowl or a dish. If made from cornmeal to which boiling water is added, this can be seen as a variant of porridge, though these are more often described by regional/national variant names such as polenta and grits and are prepared and served according to special regional traditions. Oat and semolina porridge are the most popular varieties in many countries; other cereals used for porridge include rice, wheat, barley, and cornmeal. Legumes such as peasemeal can also be used to make porridge.

Gruel is similar to porridge but is much more like a drink; it has a very thin consistency and is made with water.

In many cultures, porridge is eaten as a breakfast dish, often with the addition of salt, sugar, milk or cream. As the traditional breakfast of Scotland, it is made with salt. Some manufacturers of breakfast cereal sell "ready-made" versions. Porridge is one of the easiest ways to digest grains or legumes, and is used traditionally in many cultures as a food to nurse the sick back to health. It is also commonly eaten by athletes (especially those who do road running) during training.

In Scotland, the art of porridge-making is competitive with the World Porridge Making Championships held annually in Carrbridge, Inverness-shire. The event is also known as the Golden Spurtle due to the winner receiving a gold-coloured trophy of a spurtle, which is a utensil used for stirring porridge. The contest is held in October each year.