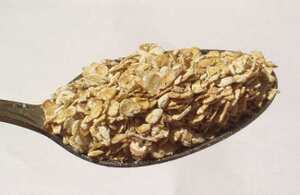 The common oat plant (Avena sativa) is a species of cereal grain grown for its seed, which is known by the same name (usually in the plural, unlike other grains). While oats are suitable for human consumption as oatmeal and rolled oats, one of the most common uses is as livestock feed. Oats make up a large part of the diet of horses and are regularly fed to cattle as well. Oats are also used in some brands of dog and chicken feed. Oats have numerous uses in food; most commonly, they are rolled or crushed into oatmeal, or ground into fine oat flour. Oatmeal is chiefly eaten as porridge, but may also be used in a variety of baked goods, such as oatcakes, oatmeal cookies, and oat bread. Oats are also an ingredient in many cogr/granolald cereals, in particular muesli and granola. Oats may also be consumed raw, and cookies with raw oats are becoming popular.

Oats are also occasionally used in Britain for brewing beer. Oatmeal stout is one variety brewed using a percentage of oats for the wort. The more rarely used Oat Malt is produced by the Thomas Fawcett & Sons Maltings and was used in the Maclay Oat Malt Stout before Maclay ceased independent brewing operations.

In Scotland a dish called Sowans was made by soaking the husks from oats for a week so that the fine, floury part of the meal remained as sediment to be strained off, boiled and eaten.