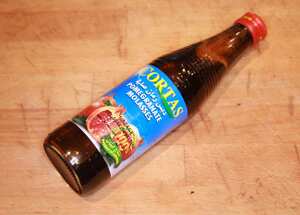 Pomegranate molasses is a syrup produced from boiling and reducing pomegranate juice. It is a key ingredient of Middle Eastern, North African and Mediterranean cooking. It is astringent and tart, yet has hints of sugar. It is normally used to add a sour note to a dish as with lemons, tamarind or sumac. Notice how thick the syrup is, the bottle had been lying down for few minutes before the photo was taken.

It is a key ingredient in Persian fesenjan and ash-e anar and the Levantine muhammara.

It has an almost indefinite shelf-life.

I recently (Nov 08) bought a bottle of pomegranate molasses from The Spice Shop. The order arrived the next day, together with my sumac.

Mix with water at a ratio of 3.5 to 1, water to pomegranate molasses.