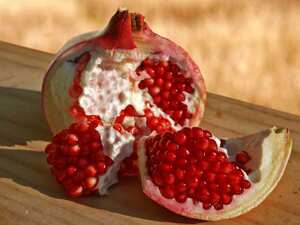 The pomegranate (Punica granatum) is a fruit-bearing deciduous shrub or small tree growing to 5–8 m tall. The pomegranate is native to the region from Afghanistan, Iran, and Pakistan and has been cultivated and naturalised over the whole Mediterranean region and the Caucasus since ancient times. It is widely cultivated throughout Algeria, Armenia, Azerbaijan, Iran, India, Turkey, the drier parts of southeast Asia, Peninsular Malaysia, the East Indies, and tropical Africa. Introduced into Latin America and California by Spanish settlers in 1769, pomegranate is now cultivated in parts of California and Arizona for juice production. In the functional food industry, pomegranate is included in a novel category of exotic fruits called superfruits.

After opening the pomegranate by scoring it with a knife and breaking it open, the arils (seed casings) are separated from the peel and internal white pulp membranes. Separating the red arils is simplified by performing this task in a bowl of water, whereby arils sink and pulp floats. The entire seed is consumed raw, though the watery, tasty aril is the desired part. The taste differs depending on subspecies of pomegranate and its ripeness. It can be very sweet or sour, but most fruits are moderate in taste, with sour notes from the acidic tannins contained in the aril juice.

Having begun wide distribution in the United States and Canada in 2002, pomegranate juice has long been a popular drink in Middle Eastern and Indian cuisine where it particularly is used in preparation of curd rice (telugu) or dadhojanam of Andhra Pradesh, India.

Grenadine syrup is thickened and sweetened pomegranate juice used in cocktail mixing. Before tomato arrived in the Middle East, grenadine was widely used in many Iranian foods and is still found in traditional recipes such as fesenjan, a thick sauce made from pomegranate juice and ground walnuts, usually spooned over duck or other poultry and rice, and in ash-e anar (pomegranate soup).

Wild pomegranate seeds are sometimes used as a spice known as anardana (which literally means pomegranate (anar) seeds (dana) in Persian), most notably in Indian and Pakistani cuisine but also as a replacement for pomegranate syrup in Middle Eastern cuisine. As a result of this, the dried whole seeds can often be obtained in ethnic markets. The seeds are separated from the flesh, dried for 10–15 days and used as an acidic agent for chutney and curry production.

In the Caucasus, pomegranate is used mainly as juice. In Turkey, pomegranate sauce, (Turkish: nar ekşisi) is used as a salad dressing, to marinate meat, or simply to drink straight. Pomegranate seeds are also used in salads and sometimes as garnish for desserts such as güllaç. Pomegranate syrup or molasses is used in muhammara, a roasted red pepper, walnut, and garlic spread popular in Syria and Turkey. In Azerbaijan pomegranate is used to make high-quality wine, some of which is exported.

In Greece, pomegranate (Greek: ροδι, rodi) is used in many recipes, including kollivozoumi, a creamy broth made from boiled wheat, pomegranates and raisins, legume salad with wheat and pomegranate, traditional Middle Eastern lamb kebabs with pomegranate glaze, pomegranate eggplant relish, and avocado-pomegranate dip. Pomegranate is also made into a liqueur and popular fruit confectionery used as ice cream topping or mixed with yogurt or spread as jam on toast. In Cyprus as well as in Greece and among the Greek Orthodox Diaspora , ροδι is used to make kolliva, a mixture of wheat, pomegranate seeds, sugar, almonds and other seeds served at memorial services.

The pomegranate fruit is one of the growing 'superfruits'.

Pomegranates are at their best and in season during the following months: December, January, February & March.,