Cuban pastries (known in Spanish as pasteles or pastelitos) are baked puff pastry-type pastries filled with sweet or savoury fillings. 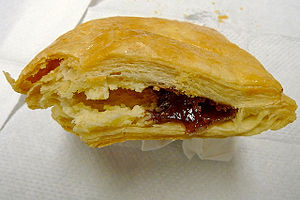 Traditional fillings include cream cheese, guava (pastelito de guayaba) and cheese, pineapple, and coconut. The sweet fillings are made with sweetened fruit pulps. The cream cheese filling is also a slightly sweetened version of cream cheese, typically made to resemble the flavour and texture of a cheesecake. The savoury fillings are usually beef, but sometimes chicken or ham and cheese are used. The beef fillings consist of a seasoned but not spicy meat, made in a tomato-based sauce. It is typical to include raisins and green olives as part of the meat filling. It is typical for a sweet glaze to be applied to the top of even savoury fillings.

The pastries are typically consumed at any time as a snack. In Miami, one can find many "window cafeterias" with customers having a pastelito with coffee throughout the day.

The pastries can be found at many Hispanic cafeterias and have also been introduced into the national retail market by Goya Foods. The pastries are also available in wholesale for the foodservice industry by several companies including Hispanic wholesale frozen bakery manufacturer Latin Flavours.