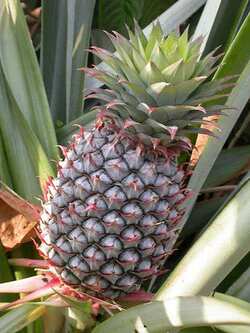 The pineapple is the edible fruit of Ananas comosus, a member of the bromeliad family that originated in Uruguay, Brazil, and Paraguay. It was so named by early European settlers because of the fruit's similarity to the pine cone.

Pineapples, like bananas, are chill-sensitive. Therefore, they should not be stored in the refrigerator. They will, however, ripen if left outside of a refrigerator.

You can buy specific tools to prepare a pineapple, but really you just need slice the bottom and the top so you have 2 flat surfaces and then remove the prickly skin by slicing down from top to bottom, moving round the pineapple. The woody core in the centre can be removed with an old-style potato peeler. This process produces lots of juice! The sliced top will sometimes grow into a new palm if planted in soil.

How much does one cup of pineapple weigh?

Pineapples are at their best and in season during the following months: December, January, February & March.