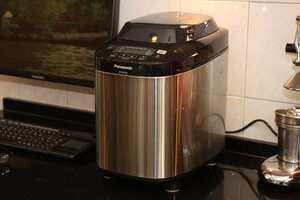 It makes bread, prepares dough and even has a number of jam and compote recipes.

The 2502 has a separate nut/ seed dispenser which is only activated during specific programs. It also has a separate yeast dispenser which releases yeast at the appropriate time during any program requiring yeast. This allow for the yeast to remain dry until it is required. Alarmingly it makes a series of very loud click as it operates. It comes with two paddles, one specifically for kneading rye bread and the other for the remaining recipes.

The recipe functions are chosen by a series of numbers, but the description for each recipe function is printed on the machine and can be seen by lifting the upper lid (the one containing the yeast compartment).

The functions, descriptions and detailed recipe timing are shown on the charts below.