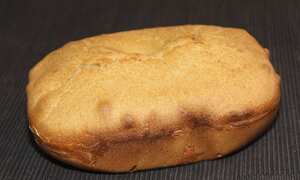 Why is my bread flat?

Breadmaker Bread does not rise

For a perfect loaf, every time

Revisiting this one again.

We've been making our own bread in a breadmaker every two or three days for the past five years now and have definitely found the solution for the perfect loaf.

Follow the above and you will never have a failure. You can't make bread automatically using this process, but you will have perfect bread every time.

My loaves don't rise properly. I do quite a lot of home-baking with yeast, mainly bread with a breadmaker and home-made pizzas. Recently our favourite bread, basic French loaf, which is normally very light and airy would not rise properly and be dense, damp and heavy. This particular French loaf uses no sugar which would normally aid the fermentation and rising process. The pizzas however would still be fine.

I thought I would start with the yeast. We always use Allinson dried active yeast in a 125g can, which has been fine up to now. One sniff gave a clue. Instead of that nice warm yeasty smell, it was musty and almost bitter. Checking the best-before date: January 2011 - almost a year out of date!

A fresh batch of yeast and we are back with perfect bread again.

Ensure that you are using Strong bread flour.

Also check that you have not added too much water as a wet loaf never seems to rise properly.

Check your yeast is fresh and within the best before date!

I'm very mechanically -minded and have worked repairing similar items to this in the past, yet I can't think what could be causing the problem as the unit warms the dough and cooks the bread correctly. I can't imagine that the program / software could change and I've stripped lubricated all the moving parts and they appear to be move freely with plenty of power. However, faulty, it must be.

I read your note about your faulty Panasonic where the bread didn't rise. I had a similar problem with another breadmaker because the lid didn't close properly. It was something wrong with the sealing around the lid. Regards/Olle, Sweden

Maybe it's the type of yeast you are using?

Are you using the correct type of yeast? See: Allinsons Dried Active Yeast is not suitable for breadmakers.

What to do with a poorly risen loaf of bread?

Don't waste the loaf. Even loaves that don't rise make perfectly good breadcrumbs. Cut the loaf into chunks, drop them into a food processor fitted with a metal blade and bland them into breadcrumbs. If the breadcrumbs are still a little moist, to dry them, spread them out on an oven tray and pop them into an oven for 15 minutes [150° C 300° F / Gas Mk 2 Slow/Low]. Stir them up halfway through.

I've found that with all brown or wholemeal flour bread recipes, half a vitamin C tablet (ascorbic acid) crushed between two tablespoons (about 100 mg) and added to the flour, seems to prevent a heavy, poorly risen loaf. It has an effect on Glutathione (WIkipedia) which has an affect on the the elasticity of the dough.

Store your yeast in the fridge

4.7/5 Duff yeast has been the cause of most of my poorly risen loaves Jerry, aka Chef (talk)