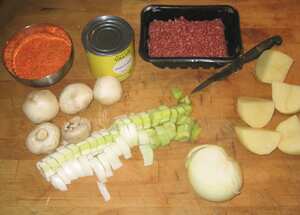 Minced beef in a vaguely Scottish way with mashed potato and vegetable accompaniment.

Turnip or swede or carrots for the leeks.

It is deliberate that the mince is added to the saucepan before the mushrooms because I have found that by adding the fungi too early they tend to disappear in the mixture and deprive the tongue of that texture.

Some cooks add water to the cooking mince but in my opinion that makes it too moist.

Any mashed potato not eaten at the time may be held over and fried crisp & brown with bacon and egg for the next day's breakfast!

Note minimum salt used in all my recipes and never in boiling/steaming vegetables.

Not an expert chef, merely a survival cook developing simple foods to my taste.

Alastair has not specify where the leeks are used, but as there were already lots of onions in the mince, I though they would go rather well in the mash - which they did. Especially when leftovers were re-fried as a sort of bubble-and-squeak.