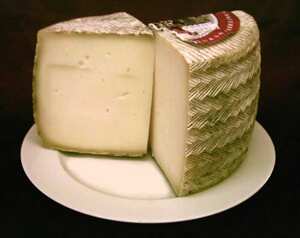 Manchego cheese is a sheep milk cheese made in the La Mancha region of Spain. Manchego is aged for 3 months or longer, and is a semi-firm cheese with a rich golden colour and small holes. It ranges from mild to sharp, depending on how long it is aged.

Manchego is probably Spain's most famous cheese. Produced in La Mancha, this cheese is made only from the whole milk of Manchega sheep. The rich, semi-firm product is aged in natural caves for generally 3 - 6 months, which imparts a zest and exuberant flavour. It is barrel-shaped and weighs about 2 kg (4 lb). It comes in a 25 cm (ten-inch) diameter wheel, 12 cm (five in) thick, with a herringbone design on the inedible rind caused by the surface of the press used in the manufacturing process. (This traditional embossed pattern comes from the time when the cheese was wrapped in sheets of woven esparto grass.) Additionally, the cheese is pressed using small wooden boards that leave imprints of wheat-ear patterns on the top and bottom of the product, rendering a unique and earthy appearance. The colour of the paste is white or light yellow and the rind is generally somewhere between light brown and dark grey. The taste depends on the maturity: mild, subtle, and fresh; or strong and full bodied with a tangy farmhouse flavour.

The taste is very distinctive, slightly salty but not too strong. It is creamy with a slight piquancy, and with the characteristic aftertaste of sheep’s milk. Just like wine and olive oil, Manchego cheese is protected by its ‘Denominación de Origen Protegida’. This controls its production, ensures the exclusive use of milk only from the Manchega sheep, and dictates an aging period (in natural caves) of a minimum of two months.

Manchego is available in three different states of maturity: fresh (fresco), 3-6 months old (curado), or matured for one year (viejo).

Manchego is delightful on Spanish crackers, or with salmon or lamb. It is often eaten with dulce de membrillo, a firm jello-like paste made of quince. Manchego also goes rather well with a medium-bodied beer.

A similar cheese is popular in Mexico and in Spanish-speaking areas of the United States, where origin and method of production are not specifically regulated. Mexican Manchego is typically a semi-firm (not hard) cheese used for melting, similar to that of Oaxaca cheese (both are often used in quesadillas). 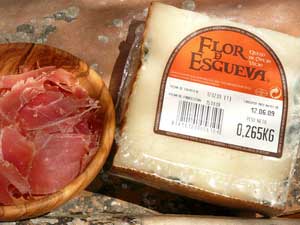 Flor d'Esgueva is considered to be the best Manchego available. It is produced in the village of Peñafiel (Valladolid), from the milk of the Churra breed of sheep.

It is an artisan cheese which matures for at least nine months and whilst it has the deep aroma and flavour of a cheese which has been matured for that length of time, it is not too strong. It can be bought online from Orce Serrano Hams.

If the Manchego cheese is not listed below, select a similar type of cheese from the list below to get a rough idea for the number of calories in Manchego cheese.