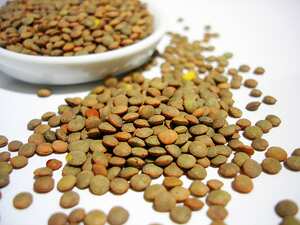 The plant material is derived from local ecotypes that have adapted to the growing conditions in the area over a period of many years and as well as from commercial varieties obtained from these ecotypes.

The plant material used is hardy, resistant to most pests and diseases, well adapted to dry climates and gives moderate yields.

Physical and morphological properties: The colour of the seeds' outer surface is brown or grey-brown with black flecks that may sometimes be speckles covering the whole surface. The cotyledons are yellow. The minimum diameter of any given seed in its narrowest axis is 3,5 mm. No more than 4 % of the lentils may have a smaller diameter.

Chemical properties: The minimum fat content of the dried lentils is 0,9 %. The maximum raffinose content is 0,3 g/100 g.

Broadly speaking, the product is grown in an area of 9,175 km2 which covers the following districts:

Within the following limits in the North and West:

Saldaña-Valdavia (Palencia), between the rivers Carrión and Esla.

Within the following limits in the East and South:

the point at which it joins the Pisuerga.

The lentil is grown on plots with the following soil properties:

The lentils are grown in rotation. Irrigation is permitted when necessary to ensure that the plants bud and when the Regulatory Council recognises that there is a lack of water.

The soil is worked to keep it free of weeds, very flat and with an adequate structure to permit healthy germination and allow direct sowing.

Phosphorous and potassium-based deep fertiliser is applied when the soil does not contain the minimum required levels of these nutrients. Organic fertiliser is used as little in advance as possible in the year prior to sowing.

Authorised plant-health products may be used.

The plants are to be harvested when they reach physiological maturity and the seed has less than 13 % moisture content.

When the harvest contains more than 6 % impurities or more than 14 % moisture, it is cleaned immediately after being harvested and before being stored.

During storage the crop is to be treated for weevils in the 10 first days after the harvest, unless during this time it is transported to packaging plant.

The storage facilities must be clean, dry, well maintained and properly aired.

The lentils must always be stored separately from other products, never mixed with lentils from other plots and kept strictly away from any materials likely to contaminate them.

In the registered packaging plants the following processes are to be carried out in the order set out below:

Dried lentils are marketed in the period between the harvest and the 30 September of the following year. This period can be extended, once only, by up to six months.

Bulk lentils may not be marketed under the Protected Geographical Indication.

Dried IGP lentils are classified under the marketing category ‘Top quality’ (‘Extra’) as defined in the Spanish ‘quality standard for certain packaged, dried (and decorticated) pulses destined for the domestic market’ or the relevant legislation in force from time to time.

garbanzos y lenejas), published in 1984 by the Spanish Ministry of Agriculture, Fisheries and Food, states that ‘Lentils of the varieties pardina, pardinas franciscanas or pardinas francesas come from populations not too different from the’ variabilis ‘variety of the’ Lens culinaris medicus ‘species.

Medium-sized, they are grey-brown or reddish-brown, depending on where they are grown, with a relatively constant diameter of between 4 and 5 mm. They grow most easily in Tierra de Campos around Valladolid, Leon and Palencia and in the province of Burgos. Pleasant tasting and very soft on the palate, they are eaten throughout Spain, although in the areas where they are grown demand is greatest for the commercial types’.

1987 by the Ministry of Education and Culture of the Castile-Leon regional government states that ‘Castile-Leon is notable for producing the rubia castellana, also known as lentejón, lenteja de la reina or rubia de la Armuña salmantina, which in its place of origin is called gigante de Gomecello or pardina de Tierra de Campos, in Valladolid is known as verdina, very popular in purées and creams, in Burgos it goes under the name of lentejas de Villalta and in Leon is referred to as lentejas de Babia’.

The properties of the Lenteja Pardina de Tierra de Campos are conditioned by the natural characteristics of the area in which it is grown, in particular by some of its more distinctive aspects (climate, soil and altitude), which have led to the spontaneous emergence of a plant (ecotype) well adapted to this environment.

The climate is of the arid/semi-arid type, with average annual rainfall of 464 mm, an average lowest temperature of - 9 °C and average highest temperature of 18,6 °C. The coldest month is January and the hottest July.

The frost period lasts almost 8 months and the months with the highest rainfall are May and November.

These characteristics create moisture levels ideal for promoting germination in the most usual sowing period (November), and promote good seed formation (the following May) and rapid and effective drying of the seeds in June and July, when the temperature and hours of sunshine are most favourable, coinciding with the summer solstice and enabling the crop to be stored with no problems of fungus or bacteria. The low winter temperatures also provide natural protection against pests.

Soil: The main properties of the soil in the production area are: the high percentage of clay that is characteristic of Tierra de Campos; its neutral or alkaline pH; the low levels of organic material; normal levels of potassium and relatively low levels of phosphorous (although these are higher than in neighbouring areas). In order to obtain a product that meets most of the required organoleptic properties, the soil must have minimum levels of organic material (to make the product less floury), potassium (giving a more buttery and less astringent product) and phosphorous (contributing to softer skins, lower astringency and higher fat content).

With an average altitude of 750m above sea level, the production area is flat and has the typical relief of farming land with no major obstacles to working, although it is exposed to erosion. The land rises slightly in the north to over 1 000m, falling to 650m in the south-west, near the river Valderaduey.

Altitude is a very important factor since it contributes to a smoother skin and a more buttery, less astringent product. For this reason, plots are not permitted to be above 850 metres.

The pardina lentil comes from local ecotypes cultivated in the area for many years and thus adapted to the environment, i.e. they have the most resistance to drought, pests and disease.

Human and processing factors: Pardina lentils have been cultivated for so long in Tierra de Campos that local farmers have perfected the best techniques and know how to select the most suitable land, and they do not regard maximising productivity as a priority, but prefer to concentrate on producing a high-quality product that helps them rotate their crops by improving soil quality.