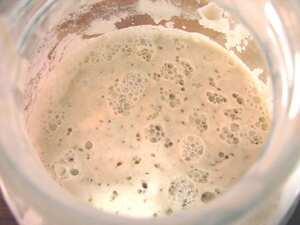 The leavening effect of wild yeasts on a sourdough starter

A leavening agent (also leavening or leaven) is any one of a number of substances used in doughs and batters that causes a foaming action which lightens and softens the finished product. 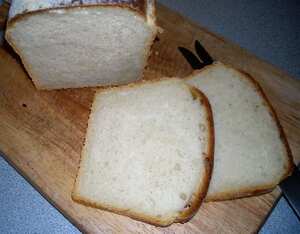 The leavening agent incorporates gas bubbles into the dough—this may be air incorporated by mechanical means, but usually it is carbon dioxide produced by biological agents, or by chemical agents reacting with moisture, heat, acidity, or other triggers. When a dough or batter is mixed, the starch in the flour mixes with the water in the dough to form bubbles, which when baked, solidifies leaving a matrix of air holes.

Microorganisms that release carbon dioxide as part of their life cycle can be used to leaven products. Varieties of yeast are most often used.

Yeast leaves behind waste by products that contribute to the distinctive flavour of yeast breads. In the naturally leavened sourdough breads, the flavour is further enhanced by various bacteria.

Leavening with yeast is a process based on fermentation, biologically changing the chemistry of the dough or batter as the yeast works. Unlike chemical leavening, which usually activates as soon as the water combines the acid and base chemicals, yeast leavening requires proofing, which allows the yeast time to reproduce and consume carbohydrates in the flour.

Chemical leavens (leaveners) are mixtures or compounds that release gases (usually carbon dioxide) when they react with moisture and heat; they are almost always based on a combination of acid and an alkali; these leave behind a chemical salt. Chemical leaveners are used in quick breads and cakes where a long biological fermentation is impractical or undesirable.

Creaming is the process of beating sugar crystals and solid fat (typically butter) together in a mixer integrating tiny air bubbles into the mixture.

Using a whisk on certain liquids such as cream, oils and egg whites, can also create foams through mechanical action. This is the method employed in the making of sponge cakes, where an egg protein matrix produced by vigorous whipping provides almost all the structure of the finished product.

Observers of the Jewish faith are prohibited from eating leavened bread or derivatives of this during passover.

(Exodus 12:15: Seven days shall ye eat unleavened bread. Even the first day ye shall put away leaven out of your houses; for whosoever eateth leavened bread from the first day until the seventh day, that soul shall be cut off from Israel).