Harts' horns, are the horns of the male red deer. Various substances were made from the shavings of these animals' horns.

The oil of hartshorn is a crude animal oil obtained from the destructive distillation of the deers' bones or horns. 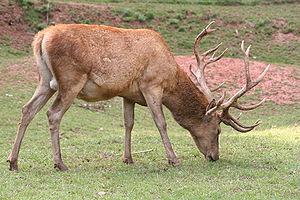 The salt of hartshorn (bakers' ammonia) actually refers to two distinct substances, sal ammoniac (ammonium chloride), and ammonium carbonate, which have been obtained from oil of hartshorn by dry distillation. This substance was used in Scandinavian countries as a leavening agent before commonplace use of commercial leavens such as baking powder and yeast. A disadvantage of heartsorn is that the baked product can retain and unpleasant ammonia oour.

The spirit of hartshorn (or spirits of hartshorn) is an aqueous solution of ammonia. Originally this term was applied to a solution manufactured from the hooves and horns of the red deer, as well as those of some other animals. The aqueous solution was a colourless and pungent, consisting of about 28.5 percent ammonia. It was used chiefly as a detergent, for removing stains and extracting certain vegetable colouring agents, and in the manufacture of ammonium salts.