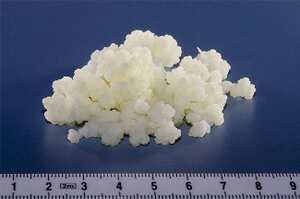 Kefir (alternately kefīrs, keefir, kephir, kewra, talai, mudu kekiya, milkkefir, búlgaros) is a fermented milk drink that originated in the Caucasus region. It is prepared by inoculating cow, goat, or sheep's milk with kefir grains. Traditional kefir was made in skin bags that were hung near a doorway; the bag would be knocked by anyone passing through the doorway to help keep the milk and kefir grains well mixed.

Kefir grains are a combination of bacteria and yeasts in a matrix of proteins, lipids, and sugars. This symbiotic matrix forms grains that resemble cauliflower. Today, kefir is becoming increasingly popular due to new research into its health benefits. Many different bacteria and yeasts are found in the kefir grains, which are a complex and highly variable community of micro-organisms.

Traditional kefir is fermented at ambient temperatures, generally overnight. Fermentation of the lactose yields a sour, carbonated, slightly alcoholic beverage, with a consistency similar to thin yogurt. Kefir fermented by small-scale dairies early in the 20th century achieved alcohol levels between 1% and 2%, but kefir made commercially with modern methods of production has less than 1% alcohol, possibly due to reduced fermentation time.

Variations that thrive in various other liquids exist. They may vary markedly from kefir in both appearance and microbial composition. Water kefir (or kefir d'acqua) is grown in water with sugar (sometimes with added dry fruit such as figs, and lemon juice) for a day or more at room temperature.

Production of traditional kefir requires kefir grains which are a gelatinous community of bacteria and yeasts. Kefir grains contain a water soluble polysaccharide known as kefiran that imparts a rope-like texture and feeling in one's mouth. Kefir grains cannot be produced from scratch, but the grains grow during fermentation, and additional grains are produced. Kefir grains can be purchased or acquired from other hobbyists. Kefir grains appear white to yellow and are usually the size of a walnut, but may be as small as a grain of rice.

One can change the nutrient content by simply fermenting for shorter or longer periods. Both stages have different healthful benefits. For instance, kefir over-ripened (which increases the sour taste) significantly increases folic acid content. Kefir also aids in lactose digestion as a catalyst, making it more suitable than other dairy products for those who are lactose intolerant.

The kefiran in kefir has been shown to suppress an increase in blood pressure and reduce serum cholesterol levels in rats.

While some drink kefir straight, many find it too sour on its own and prefer to add fruits, honey, maple syrup or other flavours or sweeteners. Frozen bananas, strawberries, blueberries or other fruits can be mixed with kefir in a blender to make a smoothie. Vanilla, agave nectar and other flavourings may also be added. In Poland Kefir is sold with different varieties of fruit and flavours already added, both in the organic/ecologic and non organic varieties. It is a breakfast, lunch and dinner drink popular across all areas of the Russian Federation, Belarus, Ukraine, Poland (second largest producer after Russia), Norway, Sweden, Finland (especially Russian and Estonian minorities), Latvia, Estonia and Lithuania where it is known as an affordable health drink. In Southern Slavic countries kefir is known as Jogurt, (because of the name many people think it's yogurt, but it's not) and it's consumed anytime in the day, especially with zelnik, burek and banitsa.

Kefir grains will successfully ferment the milk from most mammals, and will continue to grow in such milk. Typical milks used include cow, goat, and sheep, each with varying organoleptic and nutritional qualities. Raw milk has been traditionally used.

In addition, kefir grains will ferment milk substitutes such as soy milk, rice milk, and coconut milk, as well as other sugary liquids including fruit juice, coconut water, beer wort and ginger beer. However, the kefir grains may cease growing if the medium used does not contain all the growth factors required by the bacteria.

Kefir is one of the main ingredients in Lithuanian cold beet soup šaltibarščiai (Polish chłodnik), commonly known as cold borscht) and Russian summer soup (okroshka). Other variations of kefir soups and foods prepared with kefir are popular across the former Soviet Union and Poland.

Others enjoy kefir in lieu of milk, on cereal or granola.