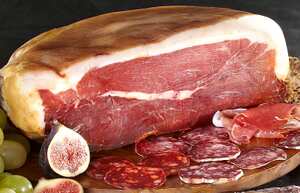 IGP Jambon de Bayonne ham is a leg of pork, trimmed, salted using dry salt from the Adour basin and dried in that area for at least 7 months. Throughout the period of maturing and curing, the ham develops its aroma and becomes tender. When sliced thinly, it melts in the mouth and has a delicate and only slightly salty taste.

This comprises an area where the pigs are raised and an area where the ham is processed. The area for raising the pigs comprises the following regions and departments of south-eastern France: Aquitaine, Mi di-Pyrenees, Poitou-Charentes and the following neighbouring departments: Haute-Vienne, Corrèze, Cantal, Aude and Pyrénées Orientales. The area for the processing of the ham (salting, drying, curing and boning) lies south-west of the Adour and includes the cantons along that river. It includes the department of Pyrénées-Atlantiques and parts of the departments of Hautes Pyrenees, Landes and Gers.

Those involved in all stages of the production of Bayonne ham take care that it can be traced. The product is identified as follows:

• the pigs are marked when they are raised;

• the fresh ham is marked in accordance with the specification for slaughter and cutting;

• the ham is marked when it goes for salting.

All operations concerning the transfer of animals and hams are recorded and the documentation retained.

The conditions governing the various stages of production of Bayonne ham are:

• slaughter and cutting: fresh hams are selected on the basis of weight (at least 8.5 kg), absence of visible blemishes and quality of meat and fat;

• processing: salting using salt from the Adour basin, drying and curing for at least 7 months from the date of salting.

The salting of Bayonne ham, a traditional local skill, acquired a reputation through its sale in Bayonne in the sixteenth-century. Its present reputation is wellestablished, as is attested by two national consumer surveys. The supply of fresh hams from a larger area of production to salting plants in the processing area is a traditional commercial practice which still continues today. The characteristics of Bayonne ham are related to local know-how which has exploited to the full the quality of fresh hams from the area of production, the favourable climatic conditions in the Adour basin and the use of rock salt deposits.

To preserve the IGP Jambon de Bayonne well, it is necessary to grease the exposed part of the boned ham, and then wrap it with a length of cloth or with aluminium foil and replace it in the less cold part of the refrigerator, where it can be kept up to two months. The ham on the bone can be kept in the same way; alternatively, it can be hung in a bag of cloth in a cool environment with a temperature between 10 and 14°C. This ham is perfect raw, hand-sliced or well roasted in a frying pan, as per the countryside custom, served with country bread and local butter. It is particularly good as appetiser, simply sliced and served, and can also be used as filling for the baguette, the typical French bread. Furthermore, it is also used for the cooking of roasts and to stuff birds cooked in the oven or in the saucepan.