1/5 Horrid and nasty. A waste of good pork. The Judge 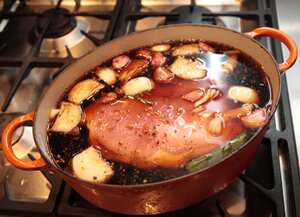 Bring to the boil and simmer for 30 minutes

Don't bother making this recipe unless you know of a way to improve it!

I did have reservations about this recipe when I first made it as the meat did not appear to be properly cooked. I re-cooked the meat a second time and have now left it for a month or so to 'mature'. Well the still uncooked meat has seeped out into the wine, giving it a nice bloody-pink colour. I did try some of the properly cooked meat and it was very tough and had an odd, almost unpleasant flavour. Not wanting to waste the meat, I tried to use it for a vindaloo curry. The curry sauce was delicious as always, the pork however was like pieces of wood. Inedible. I don't have many failures, though this has to be a big one! I'm sure a better cut of meat such as fillet would improve the texture, but as the flavour was dubious too, I wouldn't bother if I were you.

An unusual way to prepare pork. Slice thinly and serve with rice and a beansprout salad. It's pickled pork!

Drain the pork and serve with a beansprout salad and rice

I would suggest keeping the drained wine as a base for other meat-bases sauces.

Use a combination of onions / leeks / spring onions

My first attempt was not cooked nearly well enough. Even after a secondary cooking spell. After a month the blood from the underdone pork started to seep back into the wine. It would be unsuitable as drunken pork, though it seems to be fine as a base for Pork vindaloo!

Slice the pork very thinly next time. It will also absorb more flavour from the wine.